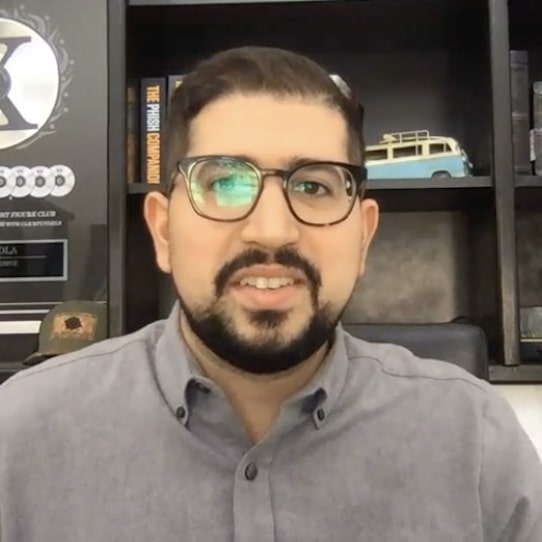 Rich Feola caught my attention when he ran a Facebook ad throwing Sam Ovens under the bus. Sam had told him to shut down his Solar Exclusive agency and sell courses instead. Rich didn’t listen. He was determined to scale his agency. And scale he did. He went from thirty-five K a month to two million a month. Now he sells a 60 Day Agency Challenge course for a hundred and ninety-seven bucks, plus some upsells. Read on for my review.

Rich started in marketing and sales about ten years ago. He went door-to-door trying to drum up business for a home remodeling company. Did that for three years. Then he became a financial advisor. Needed to figure out how to get his own leads. Got into digital marketing. Got pretty good at it. Started running ads for some of his financial advisor friends. Then he met a guy in his networking group who was in solar, took him on as a client, crushed it, and it was on.

“That kind of inspired me,” Rich said. “I thought it [solar] was a cool industry. I liked the fact that we were helping people save money. I liked that we were helping the environment. I liked the fact that it was a booming industry that was helping the economy. And so I decided, hey, let’s create Solar Exclusive. And that was like our DBA for a few years. And then we moved our company from New Jersey to Nevada, so now we’re based in Las Vegas. And we’ve been going strong for four years.”

Today Solar Exclusive is one of the premiere solar marketing agencies. They have about three hundred and fifty clients and do over eight figures a year. They’ve worked with the biggest brands; companies doing hundreds of millions in sales. So that’s how Rich got into it. He started with one client, struck gold, made both the client and himself a ton of money, went and expanded from there. Over the years he transitioned from Facebook ads to YouTube ads as his main lead source.

In the early days, they could get good leads on Facebook for under five bucks a lead. As costs crept up, they looked into Google/YouTube, liked some of their more advanced features, ran some tests, numbers were promising, so they made the switch. Another benefit was they had much less issue with ad accounts going down. Whereas, with Facebook, Rich’s clients were getting banned left and right; oftentimes for no apparent reason. It was a stress they didn’t need.

In regards to YouTube ad strategy, Rich and his team have found a combination of education and direct response marketing works best. They make videos that explain the benefits of switching to solar, how to get a solar loan, et cetera, and then end with something like, “Click here to see how you could start saving money with solar.” From there, you can retarget with lots of different styles of videos, switching up the setting, length, type of content, and call to action. Personal, selfie-style videos outperform commercial-quality videos.

For more on scaling your digital marketing agency using Rich’s insights, check out his Ad-Visory no-BS agency accelerator program: 60 Day Agency Challenge. Cost is just two hundred bucks. Thirty day money back guarantee. Proceeds go to charity. Rich is transparent in that he’ll present you with four different upsells, valued at nearly nine grand, once you buy. Gotta say, it’s refreshing to see someone else encouraging you to build a real business rather than “you should become a coach who coaches coaches.”