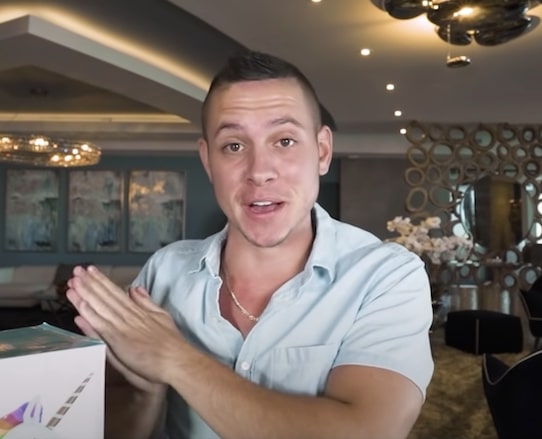 Kevin David’s latest YouTube ad has him flashing a check for nearly eighty-one grand. An amount that is more than he used to make in an entire year at his old nine-to-five job. And now he earns that in a single check doing what’s called Amazon FBA. He holds up a box with a unicorn floatie on it. He buys them for just about five dollars apiece. He then turns around and sells them on Amazon for thirty-five bucks a pop. A seven hundred percent markup. Nice.

“Now, is this a new business model?” Kevin asks. “Absolutely not. It’s the same business model that Walmart and many other billion dollar companies have used in the past to create massive empires. But the difference is you can actually do this from the comfort of your own home by leveraging the power of Amazon FBA.” He goes on to say how you’re probably skeptical, admitting it does sound a little too good to be true.

Can you really buy unicorn floatation devices in bulk for five bucks, mark them up seven-X, and then list them on Amazon and expect people to pay that much for them? Absolutely, Kevin says. And for all the skeptics out there, he’s put together a free case study to address your concerns and go into much more detail. It explains how he went from complete beginner to creating an Amazon empire leveraging one secret.

“And it was that secret and realization that actually got me featured in Forbes, Entrepreneur, The Wall Street Journal, and so many other magazines, literally for helping tens of thousands of people just like you get started building their Amazon empires.” He warns that this is probably the first and last time you’ll see this exact YouTube ad from him. So click the link and sign up while the case study is still free.

What’s the worst that could happen? You come, watch the free twenty minute case study, and decide it’s not for you? Big deal, says Kevin David. Or maybe you check it out and you realize just how many people are actually taking advantage of the hottest industry in the world right now, which, of course, is Amazon. But don’t be like the majority of people who procrastinate and never take any action.

“If you want to be like the one percent, you have to do what the one percenters are willing to do that the ninety-nine percent of other people are not,” Kevin adds. “And the fact of the matter is, one of the most important things my mentor ever taught me was if you change nothing, nothing is ever going to change for you. And if you don’t get started building your own dreams, somebody will happily hire you to help build theirs.”

After one final warning that they could shut down the case study forever, and he doesn’t want to see you miss out, the ad comes to an end. If you do click through and enter your email to watch the free case study, you’ll see a pitch for Kevin’s AMZ Done For You offer. Other reviews say it costs upwards of forty thousand dollars. A steep price to pay for something that could take a year and a half to hit the break-even point. For shorter, safer path to passive income, click below.