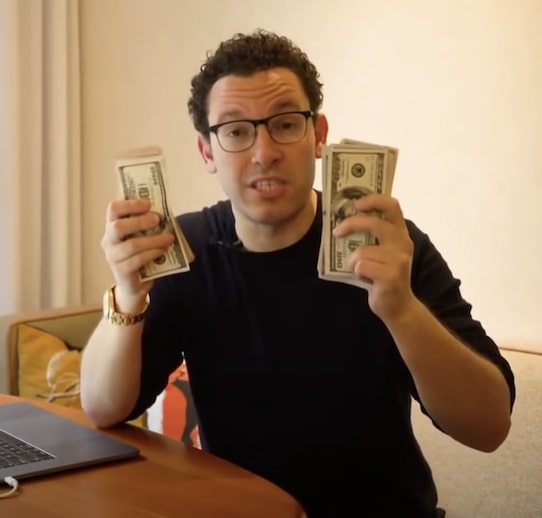 Timothy Sykes holds up two fat stacks of cash and shouts the following in his latest YouTube ad: “What’s up, Tim Sykes, millionaire mentor and trader, here with $10,000. A lot of you think you need $10,000 to get started in the stock market. That’s nonsense! That’s ridiculous! You don’t need that much to really make it in the stock market.”

Then he explains how he became successful despite not having a mentor or a teacher, and it sucked. It took far longer than it should have. Tim wants better for you. He wants to reduce your learning curve. To condense what took him two decades of trial and error to figure out, into one easy-to-read book. Skeptical? So was Tim’s first millionaire student. In fact, Tim says this guy was his first real “hater” he had online. But he clicked the link on a similar ad, read Tim’s book, and now he’s in the Two Comma Club.

How can you be next? Tim says he’s always looking for more dedicated students. And it doesn’t matter who you are, where you live, or what your background is. He can help. As long as you’re committed, he’ll share all of the lessons and rules you need to know in order to win with penny stocks. It’s not just about hot stock picks, either. It’s about understanding and adhering to time-tested strategies.

Such as? One, cut losses quickly, Tim says. Two, trade the right stocks. And three, be okay with taking small gains. Tim’s average profit is just $2,000. But a thousand here, two thousand there, a hundred dollar loss, a four thousand dollar gain, and you’re doing okay, Tim illustrates. And if you’d like to see how it’s done, he tells you one last time to click below, and sign up for a free digital copy of his book, An American Hedge Fund. “It’s a bestselling book that I normally charge, ya know, quite a bit of money for,” Tim says, as the YouTube ad comes to a close.

Look, I have no issue with you checking out a free book. Even if it was written way back in 2007, and isn’t a bestseller like Tim claims. But if you believe day trading penny stocks is a practical way to make money, I’m seriously concerned about you. I mean, even if you ignore all the data out there that says ninety-something-percent of these types of short-term traders lose money overall, just consider Tim’s education business. He says he’s got 10,000+ students, right? And in this particular ad, he mentions he’s now got “several” millionaire students? So three, right? Do the math. That’s a 0.03% success rate, at best!

Granted, yes, that’s people who’ve supposedly made more than seven figures. Surely, there are many more who’ve made smaller amounts of money. But still. What’s that bump the overall success rate to? One or two percent? Three percent, maybe? Guys, as they say, “Marketers lie, numbers don’t.”

The life Timothy Sykes showcases on Instagram was paid for by book sales, courses, and mentoring. Tim’s alleged $3 million in trading profits, assuming it’s even true, divided by the 20+ years he’s been doing it? Is only $150,000 a year, on average. Sorry, but a low six figure annual income doesn’t support the life of luxury Tim enjoys. And I just showed you that that’s what his top 0.03% of students can expect. Wake up. It makes no sense whatsoever to pursue this pipe dream.