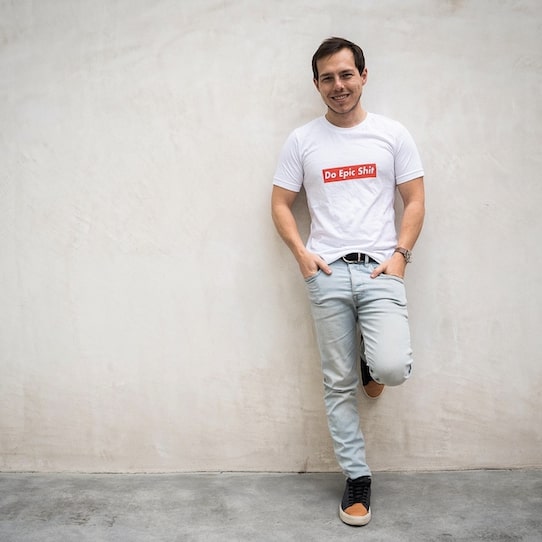 Personal finance enthusiast Graham Stephan says fifty-five percent of Bitcoin holders are brand new, having just made their first crypto investment this year. What about you? Should you FOMO in? After all, we’ve all heard stories about how that one guy turned seventeen dollars into five-point-nine million with Shiba Inu; or that chick who bought her parents a new home after Elon tweeted about Doge; or how your buddy’s girlfriend’s creepy uncle bought ETH back when it was under forty bucks, right?

No question, quite a few millionaires have been made, in a short amount of time, thanks to the explosion of cryptocurrency. Assuming you wanna get in on the action, what’s the best game plan? “First, with cryptocurrency, ya gotta understand, with risk comes reward,” Graham says. “So while, yes, you could potentially make life-changing amounts of money seemingly overnight, there’s also a strong likelihood that you lose a significant sum trying to find the next big thing.”

For every rags to riches crypto story you hear, there are hundreds of others who bought the wrong meme coin or gambled on the wrong alt coin or sold Solana too soon, or too late, or they can’t sell because they’re down like forty-five percent, right? All’s Graham’s saying is, the odds are against you if you’re trying to bet on the next ten thousand percent gainer. Maybe you should just play it safe and stick to the “blue chip” cryptocurrencies, Bitcoin and Ethereum, huh?

Or have they already shot up so much that you’ve missed the boat? If you dig through all the data, Graham says, you might be surprised. If you’re not HODLing the top crypto coins, your returns over time fall to about what you’d see just buying and holding the S&P 500. Like it or not, year over year, BTC and ETH provide the safest and highest risk-adjusted returns in all of cryptocurrency. So, when in doubt, just dollar cost average into those two, and then, see below for the next step.

Diamond hands. Which is crypto-speak for not selling, no matter how rough it gets. “The long-term buy and hold approach with the top cryptocurrencies has done well,” Graham points out, “even though in the short-term you could be down a significant amount of money. Despite the volatility and extreme crashes along the way, historically, both Bitcoin and Ethereum have always recovered and the market moves forward. So, if you have the patience, generally a buy and hold strategy is gonna be the most profitable.”

That said, we don’t know what’s gonna happen in terms of government regulation. Sprinkle in pandemics and inflation and interest rates and other countries acting a fool (*I’m looking at you, Russia) and any other macro event we might not see coming? And there’s still enough uncertainty surrounding crypto to where you probably shouldn’t invest more than you can afford to lose, as cliche as that sounds. If you’re having heart palpitations when the crypto market drops twenty-five percent, you’re in too deep.

Another thing to remember is that, when you go down the YouTube rabbit hole, and all these crypto influencers are saying, ya know, “Terra’s about to go parabolic” or “last chance to buy Decentraland,” chances are, they’re making money pushing that narrative. Maybe they’re long-term holders, maybe they just bought it and now they’re pumping it so they can dump it on you, maybe the company paid them for the shoutout, who knows. But every crypto prediction comes with some sort of bias. So be careful out there.