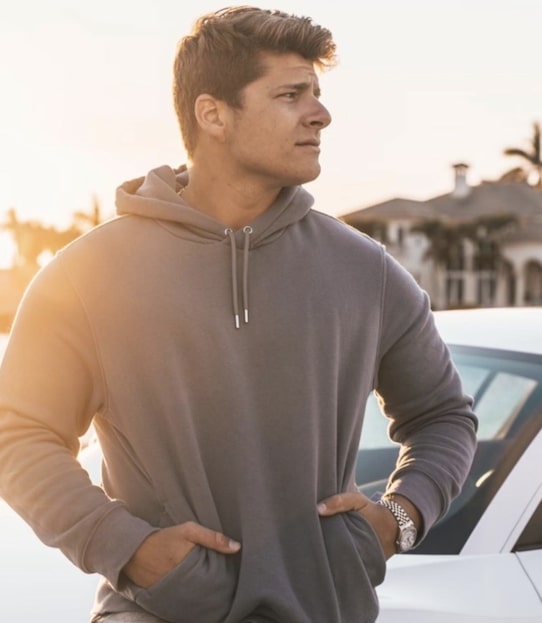 Justin Woll loves his Audi R8, his dog, his Two Comma Club awards, and posting pictures of all of them to sell you into his ecommerce university, BeyondSixFigures. It’s the most consistently successful ecom mentoring program in the industry, he says. They’ve spent millions of dollars on ads to ensure their systems are battle-tested and proven. They update their training often to keep you on the cutting-edge. But can he really take you from ecom noob to six figures and beyond? Read this review to find out.

In Justin’s pitch video, he claims he can only work with ten more students. That’s all his busy schedule will allow for. I find that hard to believe. I see his Facebook ads daily. Wouldn’t those ten spots be filled by now? Either way, “if you’re serious and would like to make six or even seven figures from your laptop in the next one hundred days and want personal dedicated attention from somebody who has been there and done that, time and time again, this is for you.”

Yikes. We’re not even two minutes in and there’s his second lie. If the average Beyond Six Figures student was going from zero to six or seven figures in just a few months, word would spread like wildfire. Everyone in the world would quit their day job and enroll in Justin’s coaching program. Sure, maybe he had one rock star who pulled that off. But to act like that’s a typical result? Pfft. No way.

If you can look past all that, Beyond Six Figures will teach you Justin’s fool-proof blueprint for building a million dollar ecom laptop business. You’ll learn about product research, sourcing, Facebook ads, scaling up your winning campaigns, increasing sales conversions, upsells, email marketing, mindset, and more. “I’m going to simplify the whole process for you, download everything into your subconscious, and make sure you actually make money with this,” reads one of his slides.

Justin has worked out deals with manufacturers to get you white label packaging and faster shipping right off the bat. He knows which markets and products are hot at any given time. He’ll audit your Shopify store before you go live to ensure you’re on the right track. “This isn’t a course,” Justin emphasizes, “it’s a personal mentorship program that will actually carry you to success.” They’ve even been featured on Forbes. I looked it up; it’s a paid article. Which is fine, but he should disclose that.

At least he admits you will run into issues. With spend, fulfillment, refunds. But he’ll have your back every step of the way. Plus you’ll get access to his Platinum Club, a private group of six, seven, and eight figure ecom earners you can bounce ideas off of and network with. “We’re all a family here in this Beyond Six Figures community, which is phenomenal,” Justin says. “Just another perk of being part of the BSF experience.”

How much does Beyond Six Figures cost? It used to sell for $997, but Justin has continued to raise the price over the years. It’s now five grand. On top of that, you’ll need at least a few grand more for inventory, packaging, labeling, software, tools, and Facebook ads. I’d like to see Justin pump the (R8) brakes on the fake scarcity and unrealistic income claims and instead lead with facts, examples, case studies, and way more transparency.