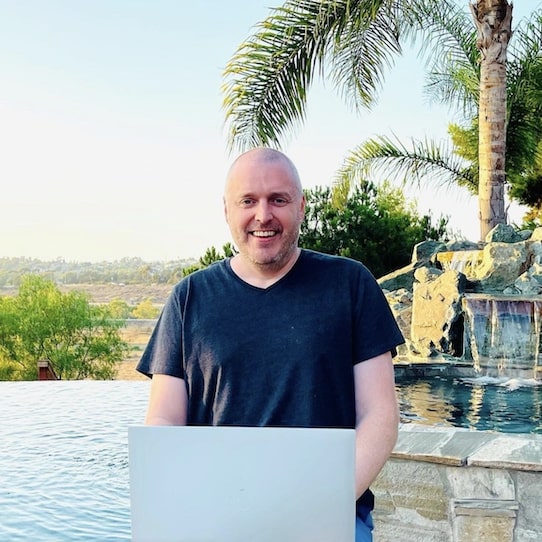 Bill Von Fumetti is a CPA and Advanced Certified QuickBooks ProAdvisor based out of Redondo Beach, California. Five years ago, he was just your average guy who wanted more out of life. More fulfillment, more income, more freedom. Well, guess what? Bookkeeping, of all things, was what got him there. And it could get you there, too. In fact, starting an online bookkeeping business is one of the straightest paths you could take to make more money and live life on your terms. My Booming Bookkeeping Business review continues below.

Think about it, Bill says. Bookkeeping is easy to learn. And with the right training, anybody can do it. Contrary to common belief, you don’t need to be some sort of math whiz to master bookkeeping. All you’re doing is recording all the financial transactions for a business using a program called QuickBooks. Which is free, by the way. The other reason why bookkeeping is such a great business to start is that it gives you complete control of your income and when and where you work.

Bill’s now helped over a thousand people start and grow their own online bookkeeping business. People just like you. Care to join them? If so, Bill claims he can show you the ropes and help you get started as soon as today. He’ll reveal two foolproof ways to get clients, how to price your bookkeeping services to maximize profitability, and also, school you on QuickBooks so you feel like a pro. In a perfect world, he says you could even scale to a six figure annual run rate in just ninety days.

In Bill’s brand new course, Booming Bookkeeping Business, you’ll receive six weeks of on-demand, step-by-step video training. Access anytime, anywhere, and go through the material at your own pace. By the end, you’ll have launched your own bookkeeping business, hopefully gotten your first paying client, and be well on your way to that six figure mark. The are live weekly group coaching calls in case you get stuck. Plus a private Facebook group where you can ask questions. Bonuses include checklists, templates, a custom pricing calculator, and more.

How much does Bill Von Fumetti’s Booming Bookkeeping Business cost? The course is a one-time fee of one thousand nine hundred and ninety-seven dollars. What if you can’t afford that? Are there any pay plans available? Yes, one: it’s one hundred and ninety-seven dollars a month times twelve installments. So you’re paying about three hundred and sixty-seven bucks extra, if you do it that way. No mention of a refund policy, but you do get lifetime access to course updates and add-ons.

What are current Booming Bookkeeping Business members saying? Dee, from their private Facebook group, wrote: “Anybody else on here new to QuickBooks? I was really intimidated by it when I first started working with Bill, but it’s actually a breeze! Am I missing something or are there others out there feeling the same way? Or maybe I’m a genius!?!” Another student, Rhianon, left the following feedback: “What a week! Had four phone consultations and closed three of them! Added a total of just over $15k to my annual revenue this week alone!”

Then there was Melissa, who said: “Just finished my second week in Booming Bookkeeping and booked my first client! Woo-hoo! $475 monthly bookkeeping, which I thought might be too high, but I listened to Bill and he was right. This program has been the best investment I have ever made, hands down. The video calls with Bill are absolutely priceless. Really appreciate the help and encouragement from the community as well. Thank you all!” Seems like some happy campers over there.