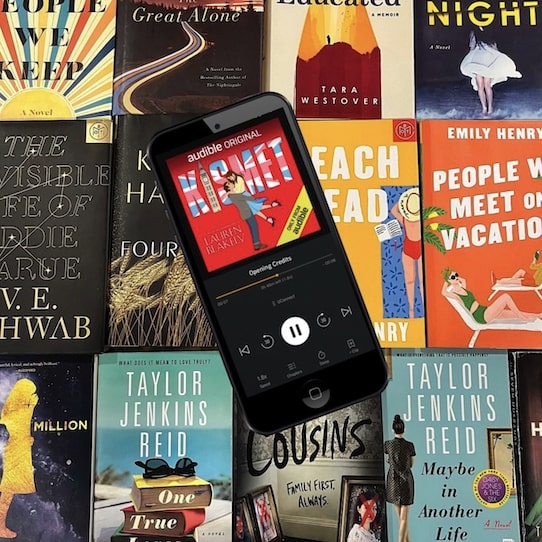 Audible by Amazon: the new way to cash in on Jeff Bezos’s platform without selling physical products? Or a pipe dream promoted by the Mikkelsen twins of Go Publishing Life? Hmm. Probably somewhere in the middle. Audible isn’t new and making money with audiobooks isn’t as easy as they make it seem, but it can be done. Here’s how to increase your odds of success. First, if you’re gonna do this, try to make your audiobooks at least five hours, if not more.

It used to be, as long as it was three hours, you were good to go. More recently, as competition’s increased, that three-hour-length space is getting saturated. Creating an audiobook that’s longer than that will help you stand out. This means when you’re writing these books, they need to be about forty to forty-five thousand words long. That’ll translate into five-ish hours or so once you get it narrated. So plan on spending more to get each audiobook made if you’re outsourcing it.

A gamble that’ll likely pay off though. On top of differentiating yourself, a five-plus-hour audiobook can be sold for more money than a shorter one on the same topic. You’re looking at maybe $19.99 instead of $14.99. That extra five bucks can go a long ways. All things equal, you’re twenty-five percent more profitable than your three-hour competitors. But say you’re running pay per click ads. You can outspend all the “shorties,” scale faster, get more reviews, and work your way up the algorithm.

Second is you wanna focus on the listener’s wants. It’s gotta make sense. For example, I’ve seen AIA members who made cookbook audiobooks then wondered why they weren’t making any money. Like, dude, people probably wanna see pictures of what they’re about to make. Same goes for any how-to or tutorial topics: they’ll wanna see visuals for each step, so audiobooks are not the best format for that. There’s a reason the “how to knit” niche is pretty much wide open on Audible, right?

Okay, so you’ve got something people actually want to consume via audiobook, and you can stretch it to at least five hours; what else? The third thing to consider, before pulling the trigger, is are there at least a hundred other audiobooks on that same topic? If not, the demand may not be big enough to make it worth your while. But obviously, find a happy medium. If it’s way more than a hundred, it might be too crowded. Which brings me to my next point. Making sure you can get a slice of the profits, right?

So four is, how many reviews do those existing audiobooks have? Right around a hundred, maybe a little less, is the sweet spot. If the top ones have thousands, great, they’re making lots of money, but it’s gonna be hard to catch ’em. Whereas, ninety-one reviews says, “Okay, cool, they’re making sales, but I can match that in due time.” Fifth, look for a BSR (aka Amazon’s Best Seller Rank) of below about 15k. That’s a great benchmark when it comes to popular audiobooks.

Last but not least, sixth, your audiobook needs to be fire. With the Mikkelsen twins and a few other gurus collectively teaching tens of thousands of students how to make an extra income on Audible, you can’t just do the bare minimum and expect to get anywhere. You need people to buy your audiobook, love it, recommend it to their friends, leave glowing reviews, not refund, and then Amazon will reward you with more organic sales from there. So again, be ready to pay a premium for ghostwriters, voice over actors, and graphic designers. Or else don’t bother.