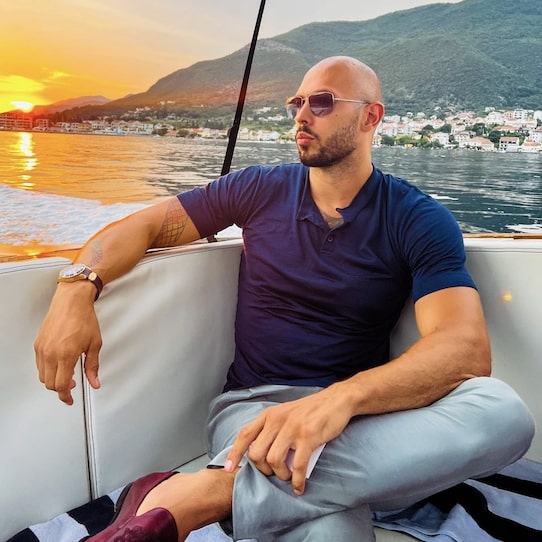 These are his words, not mine. On the Full Send Podcast, Andrew bragged about the scheme. He’d have these hot chicks get on camera and lure in all sorts of guys and pretend to be interested in ’em. Then he’d have the girls act like they were the ones typing to ’em in the chat, but it was actually Andrew, behind the scenes, manipulating them to send money again and again. Some of these guys spent their entire life savings, hoping they might one day get a chance to meet their dream girl in person.

Based on that, alone, I’d personally never buy anything this guy’s selling. Then again, as a female in her mid-30s, I’m not exactly in his target demographic, am I? Assuming you are, and assuming you can look past Andrew’s messed up moral compass, Hustlers University costs $49.99 a month. No refunds. Cancel anytime, but not before Andrew and his brother Tristan make you sit through a video about how you’re basically always gonna be a loser if you go through with your cancellation request.

And if you stick around? What’ll ya learn? Well, there’s Campuses (think mini courses) on things like ecom, copywriting, stocks, crypto, freelancing, Amazon FBA, and then, what most people choose, which is just being an affiliate for Hustlers University. Each skill slash business model is taught by someone who’s apparently made no less than $1 million, profit, by practicing what they preach. Oh, and there’ll be constant reminders to upgrade to Andrew’s War Room, a global network of high achievers, for another $6,000.

“I get called Morpheus a lot,” Tate says in a hype video for Hustlers University 2.0, with background music so loud you can barely understand him. “I get called Morpheus all the time in my DMs because I’m trying to wake people up from slavery. If you wanna get rich, find somebody who’s rich and start training to get rich right now. This is a brand new way anybody can make money, as long as you have $50. I guarantee you will make money with this system. Hold on tight. We’re about to get rich. Right here. Hustlers University.”

You gotta love how everyone else who sells a course is all, “Don’t worry guys, this isn’t one of those get rich quick schemes,” and then there’s Tate, who just embraces it. Which, in that regard, he’s almost more trustworthy than a lot of the industry. I mean, at least he admits when he’s being shifty. And hey, for $50 a month, surely you can extract something outta all those Campuses that’ll get ya a return on your investment. If nothing else, you can watch how a Certified G does business, and learn through osmosis.

I actually think Andrew Tate’s good for the internet. His soundbites are amazing, he gives us all something to talk about, and it’s hilarious watching everyone get their knickers knotted over every controversial statement he makes. Like I said, I’d never give the guy my money, but I see why more than 100,000 bros (who definitely grew up without a dad) jumped at the chance to be mentored by Andrew Tate inside of Hustlers University. My only question: How long till his relevancy fades like his fighting skills?