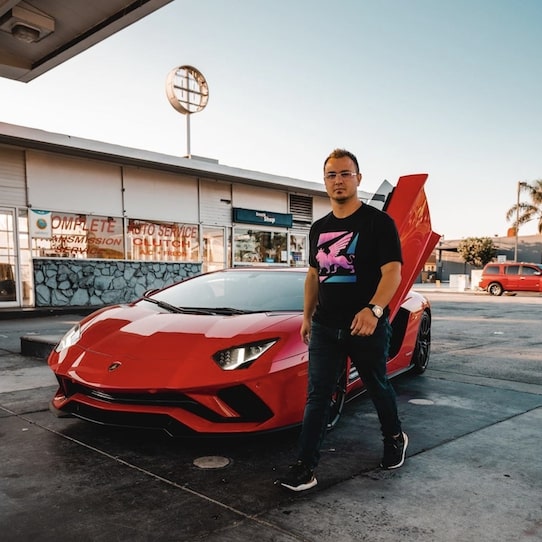 Houston Crosta, who owns Royalty Exotic Cars, sure thinks so. He started the biz back in 2015 with a single car: a metallic blue Lambo. These days, the fleet’s gotten a lot bigger. His showroom looks like a bag-a Skittles basically. He specs each car himself and buys them new (something most luxury car rental places don’t do). One of his latest additions is a 2022 Ferrari F8 Spider. He bought it for about $400k and rents it out for $2,800 per day.

That’s some big bucks, huh? Oh but it gets better. Because Houston says most of his exotics get rented out not just 15 days a month, not even all 30 days per month, but around 45 times per month! Yes, as in multiple times per day. The first guy might rent a Huracan for four hours, return it, then another dude might come in later that day and rent it for a full 24 hours; stuff like that. Or, what happens is, someone will request it for the future, which, on the books, goes on today’s rental day. Make sense? Cool.

Impressive, but how much of that’s profit? Houston estimates it’s around 10-, 12%. Split the difference, call it 11, so that’s, what, $660k he’s pocketing annually? Not too shabby considering he can hop in any exotic, any time he wants, and go cruise The Strip in it. What else? Houston says he used to buy each car outright, but in order to expand, he started leveraging those titles to establish a line of credit with the bank. Now he can pay the bank $5k per month for a new Lambo that earns him six figures a month.

“Without debt and leverage in this industry, you’re never gonna be able to take profit,” Houston says. “When you think about it, this is probably the worst business to invest in, in general, because the market’s so variable. Unlike a home, this Lambo is depreciating at about a 2- to 3% rate per month. Right? And that’s very fast. And if you’re renting the car, it’s probably more like 5- to 10% per month. ‘Cause now it’s getting so many miles on it. Maybe 10 times what it would if it was for personal use.”

Here’s another fun fact: You’d think with inflation, at least he could keep inching up his prices, but that hasn’t been the case. He’s actually been decreasing his rates over the past year or two. Why is that? Well, because it’s not an essential item. Like, if someone wants to buy a chicken sandwich [Houston also has a bunch-a Houston’s Hot Chicken franchises], and you raise the price by $1, nobody’s gonna blink an eye at that. They’re hungry, they gotta eat, they want the chicken sandwich. But nobody needs to tear around in a $400,000 Rari, fun as it may be.

Royalty Exotic Cars is more comparable to seeing a show when you’re in Vegas or getting picked up in a limo or doing a helicopter tour, right? So when people get pinched for money, it’s just a much tougher sell. And if you’re still not turned off by this business, consider this: Houston had to build his own car spa (for a half a milli) just to keep those puppies clean and tuned up and always ready to rent out. Damn. I applaud the guy, but after hearin’ all that? I wouldn’t want anything to do with it.