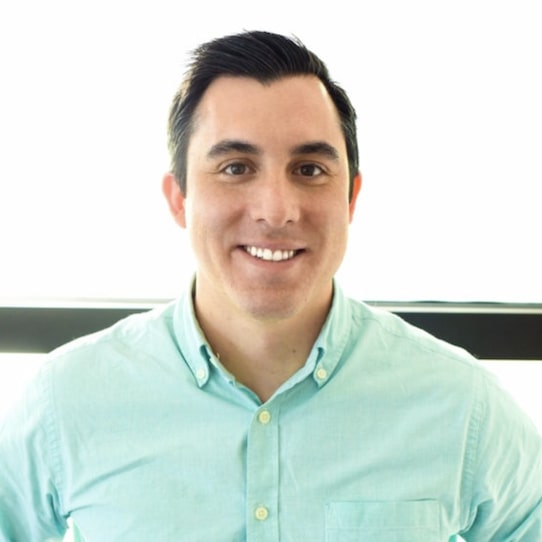 Jake Hare can help you go from napkin sketch to launched and fully funded—fast. He also wears the crap out of a turquoise shirt. Maybe you’re non-technical, you’ve got this great app idea, but no clue how to build it. So you went looking for talented developers but soon discovered you can’t afford them. And since you probably don’t live in Silicon Valley, it’s not like capital’s just being thrown at you. So you’re stuck in this cycle that’s getting you nowhere.

Jake created Launch Peer to help you break that cycle. And it all starts with a simple question: What is it that investors need to see to actually invest in your idea? If you’re non-technical and pre-product, the first thing is proof. Can you prove to the investor that when this product is built, it’ll be successful when it gets to market? Second, they need to see vision. What’s the future look like when this product is live? Third and final is belief. In you, the product, the trajectory of what you’re trying to do here.

Okay, let’s drill down a bit. Proof with no product—how? Launchpeer models Tim Ferriss’s approach to writing new books. He doesn’t wanna waste a year writing a book nobody wants to read, right? So he runs ads to a landing page for a book he’s thinking about writing, right? And he tracks how many people click the Buy Now button. (It won’t actually let ’em enter their payment info; it’s just a test.) Then he uses that data to either go ahead with the book, almost certain it’ll sell like hell, or scrap the idea altogether.

Why not do the same thing for your new app idea? Then leverage those results to convince potential investors it’s a winner. Not only that, but you’ll be able to show them you can drive your own traffic and acquire users profitably—something almost no one else is doing. Makes sense, huh? So that’s how Jake and company suggest you tackle proof if you’re someone who wants to acquire funding without having a full-fledged live working version of your product.

What about vision? Here’s where it pays to get at least a prototype made. Not the actual app, but a precursor to it. An interactive design that’ll excite early investors and make ’em that much more likely to stroke a check. When combined with that proof we just talked about, it’s a really powerful tool. Then finally, you got belief. This one’s tricky regardless of what your startup has or hasn’t done. That’s because the average investor gets pitched 40+ startups every single week. So now what?

“We have our startups focus on going after non-traditional investors,” Jake says. “According to PitchBook, in Q1 this year, nontraditional investors participated in the largest deal count on record, totaling $52.2 billion in deals. But who are these non-traditional investors? The short answer is high net worth individuals who don’t normally invest in startups, but maybe they’re heavily invested in stocks, crypto, real estate. It’s much less competitive to pitch these people because they’re not looking at you as just 1 of 40 opportunities this week.”

Want Launchpeer to guide you through all of this? Right now, applications are open for their Incubator. You can make your way through their program in just 5–7 hours per week. Once completed, they guarantee you’ll get funding for your idea. And they don’t take any equity in your business; instead, they use a co-investing model. How much does it cost to join? It’s $15,000. Payment plans are available if you need ’em. If, by chance, you don’t secure funding, they’ll refund you the $15k. I like it; I like it a lot.