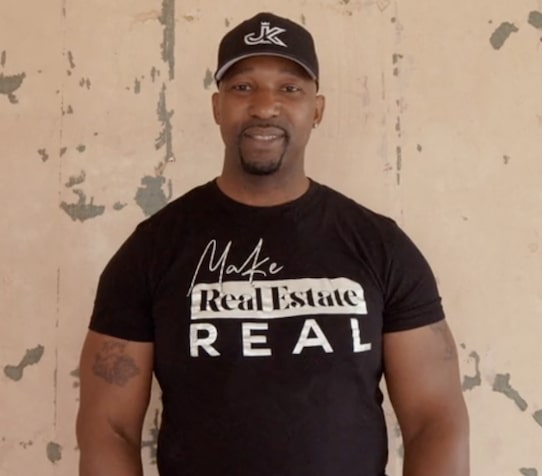 Jemal King plays Monopoly in real life. So if you’ve ever wanted to break into real estate, but just didn’t know how, maybe he’s your guy. He claims to have the blueprint, the team, and the accountability you need to create generational wealth with real estate, regardless of your experience or financial position. Is his Make Real Estate Real course any good? How much does it cost? Scroll down for my Jemal King review.

When Jemal’s dad pointed the camcorder at him and asked him what he wanted to be when he grew up, his answer left his dad speechless. “A millionaire,” he said. But he didn’t see too many millionaires that looked like him. Besides pro football players. So that’s what Jemal focused on. He was all-state in high school. Got a scholarship to play at a D1 college. Four years came and went. So did Draft day. Jemal’s name was never called.

So he went into the “family business.” Became a police officer for the Chicago P.D., just as his dad, mom, several uncles, and big brother had done. One day, on the job, he and his partner get a call about a curfew violation. No biggie. They pull up on the teenagers and one takes off running. Jemal, still NFL-ready, chases after him, corners him. Kid ends up taking out a gun and letting off rounds that just miss Jemal’s head.

How’s that for a wake up call? Jemal knew he was “done” being a policeman at this point; but he wasn’t “finished.” He needed that sole source of income to fund his next move. He wrote down all of his bills and decided he was going to buy a building for each bill. Months later, after looking at 77 different properties, he made his first investment: a four unit brick building for $125,000. He spent an additional $25,000 fixing it up. After that, it was worth $280,000. Hello, equity.

After placing four tenants, minus his mortgage payment, Jemal was pocketing over three grand a month in residual income. Eighteen years later, that same building has netted him nearly $700,000! “If it worked once, maybe it can work twice.” He ran it back. Similar result. Kept going. Before long, he was a millionaire, on paper, and he did it all while still working full-time for the Chicago Police Department. Hence his “9-to-5 Millionaire” nickname.

Jemal’s mission to build generational wealth took on a new meaning when a mentor convinced him to teach his generation everything he had learned investing in real estate. The Make Real Estate Real course was born. It condenses two decades of in-the-trenches experience into eight easy-to-understand modules that anyone can follow. You’ll learn how to profit from every type of real estate deal. Wholesales, fix and flips, buy and holds, and everything in between.

The Make Real Estate Real course-only costs $997 or two payments of $499. Upgrade to the Alumni Association, with ongoing mentoring and masterminds, for an extra $97 per month. Jemal promises, no upsells once you buy. I didn’t see anything about a refund policy. I have no problem recommending this course. I loved hearing Jemal’s story and it’s evident he’s the real deal. That said, there’s a less competitive, less complicated, far cheaper way to earn passive income from real estate. But it’s not what you think. Click below.