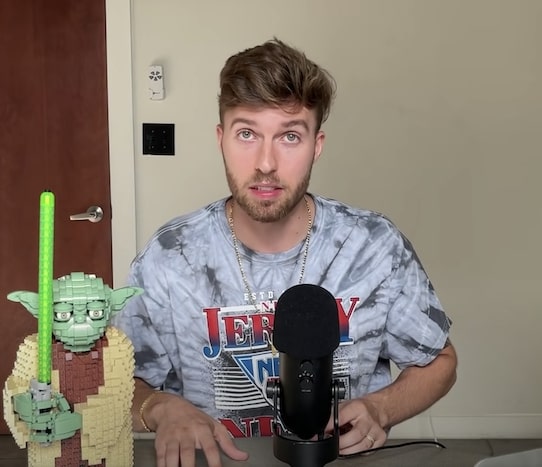 Rasmus and Christian Mikkelsen are the twin brothers behind PublishingLife.com. They sell a course on how to make money publishing audiobooks on Amazon. It’s called Audiobook Income Academy 2.0. It sells for one thousand four hundred and ninety-seven dollars plus whatever upsells they have on the back-end. They have a one hundred and eighty day profit guarantee. If you don’t make at least five grand within that time, they’ll give you your money back and throw in an extra one thousand dollars just for wasting your time.

In this Mikkelsen twins review, I want to go through their latest YouTube ad with a fine tooth comb. Try to poke holes in it. Rate their honesty. Transparency. Maybe point out some of the downsides of the so called publishing life. As you can see from the screenshot above, Christian (or is it Rasmus?) uses a random Yoda figurine (made out of Legos, maybe?) to grab your attention.

“We’ve all been waiting for it and it’s finally here,” he begins. “A way to make money with Amazon without selling physical products. This means that you can make money with Amazon without all the challenges that normally come with starting an Amazon business. Such as high start up costs; dealing with a surprisingly complex business model; buying things from China, getting it shipped to you, then shipping it to people who will buy it is not as easy as these Amazon gurus make it sound.”

“And on top of that you’re dealing with tons of competition. Everyone wants to sell physical products on Amazon because they think it’s the only way to make money with Amazon, but it isn’t,” he continues. “This new way is actually very very different. Start up costs are a fraction of what you’re used to. If you just have a few hundred dollars in your bank account, this is something you’ve got a legitimate shot at. And it’s so much simpler. Create a digital product once, sell it an unlimited number of times. No inventory. No shipping.”

“Finally, there’s hardly any competition with this new Amazon business model. Because, frankly, most people don’t even know that this exists. There’s not a lot of people doing it, and therefore, it makes being successful with it a whole lot easier.” Whichever Mikkelsen twin it is then asks you to click the button and register for a “one hundred percent free webclass” that will tell you everything you need to know about this new Amazon opportunity. How they’ve quit their jobs because of it. How they’ve helped hundreds of others do the same.

Overall, I would give this ad a seven out of ten. Three points were deducted for stretching the truth and not being completely up front about everything. I’ll give a few examples. He said this was new. It’s not. Less popular, sure, but not new. Amazon bought Audible in 2008. People have been making money publishing outsourced audiobooks ever since. He said it was inexpensive. It’s not. You’re looking at thousands of dollars to get a decent audiobook created for you. He said the webclass was free. In reality it’s a ninety minute pitch for Audiobook Income Academy 2.0, which costs fifteen hundred bucks.

Still, far from the worst I’ve reviewed. The Mikkelsen twins look like saints compared to a lot of these guys and gals who will say just about anything to get their next course sale. My biggest gripe is not with them, but their business model. Aren’t you basically selling ghostwritten garbage? Or do you mean to tell me that some stranger on Upwork who is not an expert nor passionate about, let’s say, the keto diet, can really produce a worthwhile audiobook on that subject? If so, how? By plagiarizing someone else’s work?