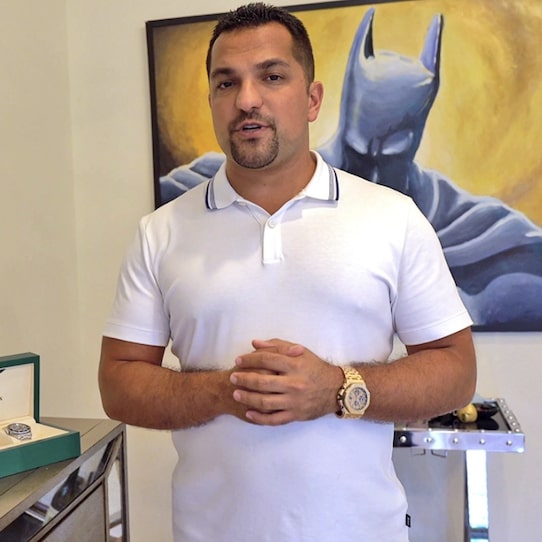 Pejman Ghadimi’s background is in finance. Believe it or not, at age eighteen, he managed a bank. By twenty-three, he was the executive VP for that same bank. Two years later, he got fired. So he started his own investment company called VIP Motoring, which was the first alternative asset management company that invested in exotic cars, watches, and art. He continued to build that company over the years and then decided to share those strategies with the masses. Enter: Secret Entourage, an online academy for entrepreneurs.

Then came some books: Radius, Third Circle Theory, and The Gate of Choice. Then the flagship courses that you probably discovered him through, Exotic Car Hacks and Watch Trading Academy. He also appeared on season two of the Netflix show, Fastest Car. Roughly thirty thousand people from around the world have enrolled in his courses. Pejman (aka PJ) prides himself in only teaching what he knows, through decades of experience, and that which he still practices to this very day.

“I created car hacking when I was younger and didn’t have a lot of money,” PJ says. “I was a nine-to-five worker in a bank, I had a good salary, but I didn’t have enough money to basically buy a Lamborghini or a Ferrari. But I did have a finance background. And I would see clients finance cars all the time and I would be like, what do they know that I don’t? Why do really wealthy people finance exotic cars? How do they do it? And why does it make sense? So I started getting curious about it.”

His first few cars, like most people, PJ lost a lot of money on them. But he kept learning, and eventually he became friends with a guy who worked at a car dealership, right? And the guy kind of broke everything down for PJ. Like, here’s how much we make selling a car, here are all the profit centers, here’s why we’re incentivized to lease cars, and so on and so forth. All the insider secrets. And that intel, combined with his understanding of money, plus the realization that higher-end cars had better depreciation curves, led to his car hacking system.

PJ essentially became a master at parking money. Only buying things that won’t lose their initial investment from a dollar standpoint. So you can park money in a savings account, right, but you could also park it in a luxury watch that you get to wear and enjoy, or in a six-hundred-plus horsepower lime green Lambo that you can go do date night in. He’s opening people’s eyes to the possibility of owning luxury goods that seem out of reach, and yet, doing so without wasting money; and potentially even making money when you go to sell them.

On that note, PJ says you’d be surprised how much margin you can pocket from flipping watches. For example, there’s one he bought a year ago for seventy grand that’s now going for two hundred and fifty grand. While that’s not the norm, you should easily be able to get a twenty to thirty percent return buying and selling luxury watches in the short-term. Something the S&P can’t do, at least not most months. And again, if you invest in stocks, you don’t get to wear them on your wrist and impress people, do you?

PJ gets a lot of hate online. He’s flashy and tells it like it is. Trolls can’t handle that. But if you know his story (and now you do) and you really listen to all the free content he puts out, what you’re left with is a hardworking immigrant who’s simply trying to dispel the myths around money and material things that are keeping people broke and bitter. Instead of talking trash, you should be taking notes. What else? Pejman Ghadimi has no Wikipedia page, he’s not married, his net worth is around fifty million, and he lives in a two million dollar mansion in Delray Beach, Florida.