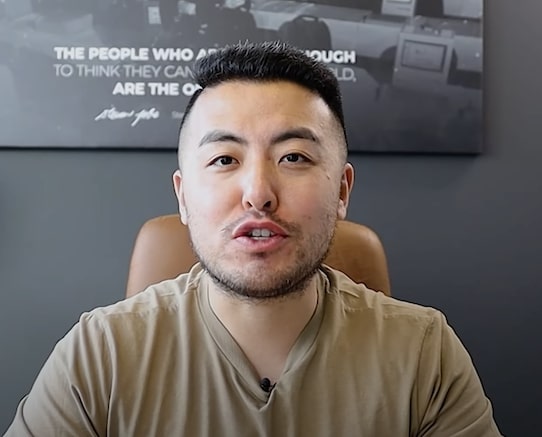 Tom Wang sold his Sdara Skincare business for multiple seven figures. This happened in December of 2020. After the high of the big payday wore off, he asked himself what in the heck he should be doing with all that money. He did his due diligence. Decided to invest thirty percent of his net worth into real estate. Another thirty percent went into stocks. Ten percent went into crypto. And the rest, another thirty percent, was left as cash. For more on Tom Wang’s wealth building strategy, continue reading below.

Tom admits he’s more on the risk averse side. You may want to adjust your own personal ratios based on a healthier appetite for risk. But another important principle is dollar cost averaging. For easy math, say Tom had an even one million dollars to divvy up. Thirty percent, or three hundred K, is going towards stocks. Does that mean he goes all in on Apple on day one? No. Of course not.

Instead, Tom might chop that three hundred grand up into ten chunks of thirty grand, and invest that every thirty days for ten months. It doesn’t matter if the market goes up or down. He’s consistently buying thirty grand worth of stocks once a month for those ten months. In doing so, he’s buying shares at different price points, thus averaging out what he pays per share. His rationale being, if billionaire investors can’t time the market, how can he?

Tom Wang found real estate to be more challenging. Buying the right house is a lot of work. Also, in Vancouver, where he lives, properties are really expensive. The ROI wasn’t great. He switched to the Airbnb model. It comes with more headaches (managing listings, being at the beck and call of anyone who stays there, etc.), but Tom is happy to put a team in place to manage everything. The extra income, compared to traditional rentals, makes it worth it.

In addition, Tom has began co-investing with other real estate moguls such as Manny Khoshbin. The benefit to that is it’s very hands-off. You cut the check, wait two or three years until the project is complete, and hope to get your original investment back, with a nice little return on top of it. The obvious downside is you don’t own any long-term asset that can pay you, passively, for years to come.

Cryptocurrency is the most interesting one. Tom views it as a hedge. The government has been printing obscene amounts of money since the pandemic started. If the value of the dollar continues to fall, perhaps crypto gains can offset it. The digital equivalent of buying gold and silver, basically. Super risky, Tom warns. He has his girlfriend manage it all. Some weeks it’s up six figures, others it’s down six figures. He honestly doesn’t care to know. Can’t stomach the swings.

Last is cash. Some say it’s trash, some say it’s king. Tom believes the latter. You need a rainy day fund. Something to fall back on when things go south. Not only that, but say there’s a massive correction. Everything’s on sale. How are you going to capitalize on those opportunities if you’re cash-strapped? Plus, cash is peace of mind. You sleep better at night with a savings account full of it. Tom is currently building another e-commerce brand via Amazon FBA. He’s launching a software. We ballpark his net worth at around eight million dollars.