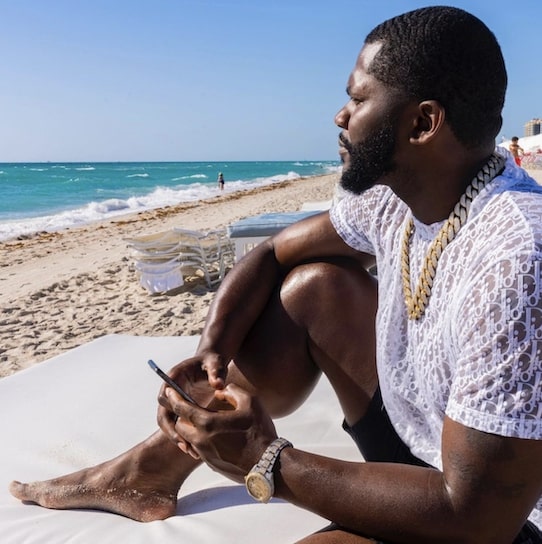 Tony “The Closer” Robinson was raised in Philadelphia by a single mom who worked two jobs to provide for them. As he got older he began getting into trouble. So, around age twelve, he was sent to live with his father in The Tar Heel State. Tony’s dad was in the military and took zero crap. He made Tony channel his energy into something positive: football. Tony went on to become a college All American. But when the NFL draft rolled around, his name didn’t get called.

The year was 2006. Tony was sleeping on friends’ couches. Surviving off of Ramen Noodles and Cinnamon Toast Crunch. Down but not out, Tony got busy. He started a YouTube channel where he uploaded videos of his workouts. I’ll prove I’m NFL ready, he figured. His friend helped him create a highlight reel which he then sent out to any pro football personnel whose contact info he could find.

From there, Tony would cold call everyone he sent the footage to, to see if they had watched it yet. Eventually he gets through to someone on the Seahawks’ staff. The guy watches it right there with Tony on the phone, invites him to tryout. Tony goes, does his thing, makes the team. Incredible! But there’s no happy ending. Tony gets cut, heads overseas to play semi-pro ball, injures his foot, retires.

Now what? He takes a job selling cars at a Dodge dealership. Despite having zero sales experience, he sells twenty-three cars in his first month. The average salesperson was only doing seven. He did it by going all in. He learned all there was to know about the biz. He was straight-up with people. He listened. He put himself in their shoes. And of course, his NFL backstory didn’t hurt. Anyways. That’s how he earned his nickname, Tony The Closer.

Life was good. Tony was selling cars left and right, making decent money. But then a gambling problem and a string of bad decisions sent him to jail for a couple months. Just like that, he had hit rock bottom. When he got out, he went to counseling and worked on himself. When he was finally in a good head space, he decided not to go back to the car lot. Instead he got into real estate. Applying his winning mentality, creativity, hustle, and sales skills, he hit the ground running.

Three months later he had already banked six figures. Fast forward to today. Tony’s done thousands of wholesales, making himself millions in the process. After the pandemic, he decided now was the time to help others find financial freedom through real estate. Rona Proof Masterclass is a ten module video course plus group coaching that teaches you how to generate new wholesale opportunities daily, stand out, close at a high rate, and scale up.

How much does the Rona Proof course cost? It’s $2,497 or five monthly payments of $697. However, if you do the pay plan, you don’t get the bonuses: Tony’s Proven Phone System course or two free tickets to his $100K Club Tour. So keep that in mind. Also, he makes it clear, there are no refunds under any circumstance. Super inspiring story. Awesome offer. But I have to be honest. There’s less competition, more leverage, and more enjoyment with what we do. Learn more by checking out the link below.