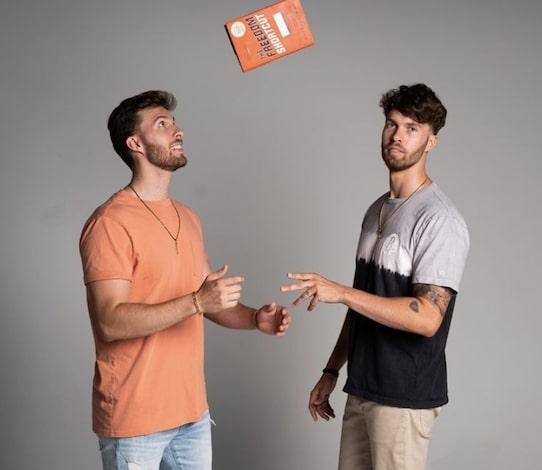 Rasmus and Christian Mikkelsen have a new book out. It’s called The Freedom Shortcut. It’s about how anyone can generate true passive income online, escape their nine-to-five, and live anywhere. Rasmus wrote it himself. It took longer than he wanted. Maybe eight or nine months, when it was supposed to be two or three. But it’s done, now, and his twin, Christian, gets to come along for the ride. They have high hopes for the book. Their goal is to hit number one on Amazon. Not just in a single category, but literally the entire Amazon bookstore.

They would need roughly twenty thousand sales to pull it off, according to Christian’s estimation. The Mikkelsen twins would like your help in getting there. But is it worth buying, reading? Let’s listen to their pitch and then decide. “So this book is about what we have dedicated the last four years of our lives to,” Rasmus says, “and that is teaching the Amazon book and audiobook publishing business model to many thousands of people at this point.”

“It’s titled The Freedom Shortcut because truthfully this business model is the shortcut to a life full of freedom,” he continues. “You could truly hand in your resignation notice at your job twelve months from now. Even if it takes you twenty-four months, that’s two years compared to the traditional route where it takes up to four years. Within this book, what I walk through, it’s divided into six modules. The first one being about the business model, why it works, and so on.”

“And then modules two through five talk about the steps required to publish your first profitable book and creating passive income from it, and then diversifying into multiple income streams. And then lastly we go over everything we’ve learned, now, over the process of having had over ten thousand students in our paid publishing program called Audiobook Income Academy 2.0. And so, you can bet we’ve learned a lot along the way.”

Christian adds that so much has changed since they first started publishing back in 2016. Even in the last year, alone, a lot has changed. They might need to update the book before long, but for now, it’s accurate and jam-packed with self-publishing insights. Even though all of their marketing shows a hardcover, it’ll only be available for purchase as a Kindle eBook. The cost? Ninety-nine cents, for now. It might go up in the future. To sweeten the pot, they’ve added some bonuses for the launch.

Three trainings, three interviews with successful students, a recorded coaching call from inside AIA. All for less than a buck. But those bonuses do expire when the book launch is over. As if that wasn’t enough, they’re giving away twenty grand worth of prizes. One thousand in cash, sent via PayPal, to ten lucky people; ten outline writing packages; one full ghostwriting package; and then one grand prize winner will get all of the above.

“All just for ninety-nine cents,” says Christian. “We’re trying to overdeliver like crazy.” He pats his bro on the back and tells him it’s a beautiful book, he’s very proud of him. I’m sure the Mikkelsen twins’s students will pump up the five star reviews, so who knows how good the book will truly be, but I guess you can find out for a buck. I hope it’s not just one long-winded presell for Audiobook Income Academy. Time will tell. In the meantime, I’ll stick to digital real estate.