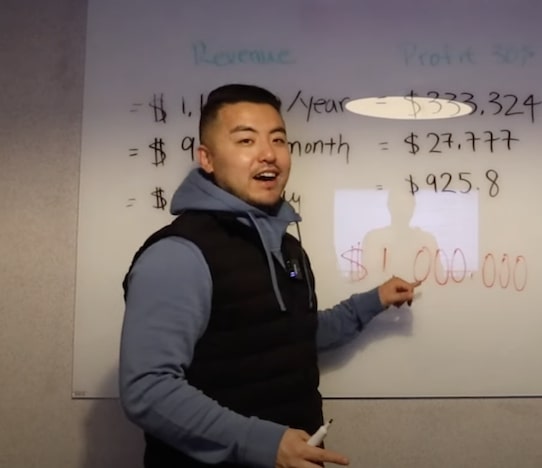 Tom Wang says making a million dollars with Amazon FBA is actually very doable. And no, he’s not talking about earning that slowly, over the course of ten years. He believes you can do it in a year or two. To pull it off, you’ll need to do roughly one-point-one million dollars a year, in revenue, through your Amazon store. Top line. Divide that by twelve and you’re looking at ninety-two grand a month. Divide that by thirty and you’re at three grand a day. Scroll down to hear more from Tom.

To be clear, just because you hit your revenue goal doesn’t mean you’ll personally net a million dollars. You could always out-spend your revenue and wind up losing money. Tom says an average Amazon store will have a profit margin of about thirty percent. So for every hundred dollars in sales, you’ll pocket thirty. Assuming you don’t royally mess anything up and drastically underperform.

All right. So if everything goes according to plan, and your Amazon store generates about one-point-one million a year in revenue, that’s three hundred and thirty-three grand a year in profit. Or about twenty-seven grand a month, or about nine hundred bucks a day. So how do you get to a million? Hold that exact pace for three years straight, right? You could. But, lucky for you, Tom Wang knows a faster way.

“So what you want to do then, when you actually hit this milestone,” Tom says, “is you actually want to sell your business. Okay? Now, there are tons and tons of people coming into this space right now. They’re purchasing Amazon FBA businesses. There’s a lot of good media coverage. There are big names, big investors coming in. And people think Amazon FBA is truly the future.”

People are drooling over the potential. For the right buyer, they’ll look at a profitable Amazon FBA business like an alternative investment to real estate. “So once your business can kind of generate this [one-point-one million a month in revenue] for at least twelve months, what you can now do is approach one of these buyers and you can sell them this business,” Tom explains in one of his recent YouTube videos.

But how do you determine a sale price? What might someone be willing to pay to acquire your Amazon FBA business? Well, they’ll take your Trailing Twelve Months profit (TTM), which is three hundred and thirty-three thousand in this case, and then assign a multiplier for it. In general, for Amazon sellers, Tom says you’re looking at about three-X. So if you take that three hundred and thirty-three K and multiply by three, there’s your one million.

Now you can just work backwards. Say you only sell one product and you make (net) about twenty bucks for every unit sold. Well, to hit that nine hundred a day (in profit) mark, you would need to move forty-five units a day. If that’s not likely, maybe you need to add a second or a third product. Crunch the numbers. Find a scenario that’s doable and attack it with everything you’ve got. As long as you execute, it’s just math from here on out.