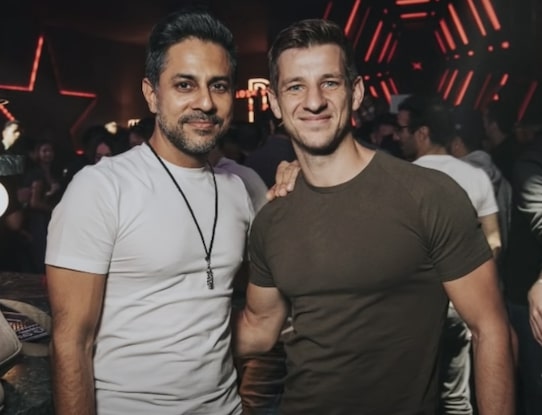 Vishen Lakhiani has a masterclass on everything. Mindvalley has been running YouTube ads promoting their new 10x Fitness program, taught by Lorenzo Delano and Ronan Diego de Oliveira. In one such ad, Vishen features his seventy-three-year-old dad who supposedly increased his leg strength by an astounding seventy-five percent in just one month. All thanks to 10x. They go on to claim you can build a superhero body in just thirty minutes of exercise per week. Too good to be true? How much does it cost? Read on for my Mindvalley 10x workout review.

On his fortieth birthday, Vishen looked at himself in the mirror. He was ashamed by what he saw. He had been completely neglecting his body. Yet, like most Americans, he was working out two hours a week on average. He tried diet after diet. None of it seemed to work. But hey, maybe I should just accept it, he thought. After all, he was a busy CEO. Fresh off a divorce. Two kids to look after. How could he not have a dad bod?

And then Vishen met Lorenzo, who was the chief of transformation at Mindvalley. Vishen couldn’t help but notice his remarkable physique. Vishen asked him what his secret was. Lorenzo’s answer shocked him. “I only work out thirty minutes a week,” he said. Vishen didn’t believe him until Lorenzo showed him before and after pictures taken over the course of three years. So Vishen hopped on board, did as Lorenzo instructed, and lost nearly two percent of his body fat in one month.

The results lasted. A year and a half later, despite spending much less time in the gym, Vishen got leaner and stronger. Just two fifteen minute workouts a week is all it takes. You can do them at home or at the gym. The secret sauce is a series of scientific discoveries all stacked together to create what is called the The 10x Fitness Program. Vishen recruited another Mindvalley employee, Brazilian Ronan Oliveira, to help host the workouts.

Lorenzo and Ronan have hyper-optimized these workouts to such an extent that, for every minute you spend training, you’re getting 10x the results. Whether you’re male or female, young or old, 10x is one of the most powerful things you can do for yourself, Vishen says. Mindvalley found that, in thirty days, people under thirty see an average of twenty-six percent strength gain following the 10x protocol; while those aged thirty to fifty averaged a fifty percent bump in strength; those over fifty, even more.

So after years of studies, hundreds of beta testers, and thousands of hours of fine-tuning, 10x is finally ready for the world. Radically transform your body in just thirty minutes a week. The cost of 10x Fitness is a one-time fee of three hundred and ninety-nine dollars, or you can do three monthly installments of one-forty-nine. Or you could just get the Mindvalley Membership for four hundred and ninety-nine bucks a year and unlock all the other Mindvalley systems, courses, and masterclasses.

I would like to hear more about diet. You would think, with only a half-hour of active calorie burning per week, your food intake would have to be flawless to get anywhere. If not, you might go backwards. You have to love Mindvalley, always pushing the envelope with their marketing. I believe they mean well, and probably have solid training and support, but c’mon. Learning the contents of a book by touching (not reading) it? Getting shredded in two fifteen minute workouts a week, regardless of diet? That’s a stretch.