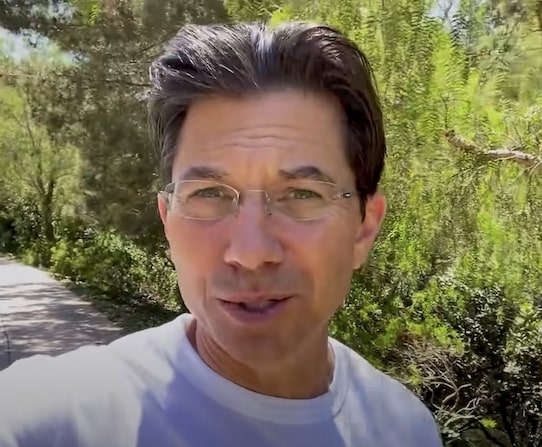 Dean Graziosi’s second wife is a young, gorgeous woman named Lisa. They had a son together. Luca. Barely able to walk, Dean holds his hand and the two of them take a slow stroll out back behind his fifteen thousand square foot mansion in Paradise Valley, Arizona. His hair glistens in the sun. He looks good for a man in his fifties. In this particular YouTube ad that caught my eye, he’s promoting an upcoming virtual workshop called The Power To Pivot. What is it? And what is Dean’s net worth these days? Scroll down.

“Do we give up too easy?” Dean says in the ad. “I don’t know. Look at this little guy. That’s my boy, Luca. Wanna know something pretty cool? We just walked like a quarter of a mile together. But what also is cool, is six weeks ago, the dude couldn’t walk. This little guy tried over and over, kept falling on his butt. But guess what? Because he’s a kid, and because he hasn’t been told no enough, he just kept trying until he figured out how to walk.”

What have you given up on too soon, Dean asks. Relationships? Diets? Workouts? Side hustles? Businesses? All of the above? Maybe we could all learn a little something from Luca. Pretend you don’t know any better. Keep going until you have the result you want. Dean has a special one-day training that could help with that. Titled The Power To Pivot, Dean and other prominent people in the influencer space will show you how to thrive in this shifting world.

Not wait for someone else to come fix it. Not search for some magical money machine that will make you rich overnight. Like Luca, you will still have to persevere and put the work in. But why not do it in an industry that is growing exponentially? My guess is he’s talking about the e-learning space. Selling courses, consulting, coaching, masterminds, workshops, and such.

It’s absolutely free, Dean promises. He does not say whether he or any of the guests will be pitching products during or after the event. You would think they would. There has to be some sort of string attached, doesn’t there? Guess there’s only one way to find out. Attend and see. That’s what Dean suggests. “If you’re ready to pivot, if you’re ready to shift, if you’re ready to explore where the economy is going, if you want to impact others, and create massive success for yourself, click the link below and join us,” he says.

One thing about Dean, the man can sell. Put him on camera, be it an actual infomercial or selfie-style iPhone video, and he’ll convince millions of strangers to do exactly as he says. Dean has leveraged that skill again and again to earn millions of dollars through book sales, seminars, and too many digital products and programs to count. With it has come quite a few complaints. Graziosi’s reputation looks like an old Buick that got left out in a hail storm.

While he’s made a fortune both online and off, his divorce from his first wife took a big bite out of his net worth. There have been a number of lawsuits too. The most recent, and serious, is one where the FTC names Dean in an elaborate scheme that defrauded aspiring real estate investors out of a combined four hundred million dollars. It is unclear how much Graziosi stands to lose if found guilty. The case is ongoing. Factoring in these things, I believe the other websites that list his net worth at anywhere between thirty-five and fifty-five million are far too generous. My guess is Dean’s current net worth is closer to fifteen million.