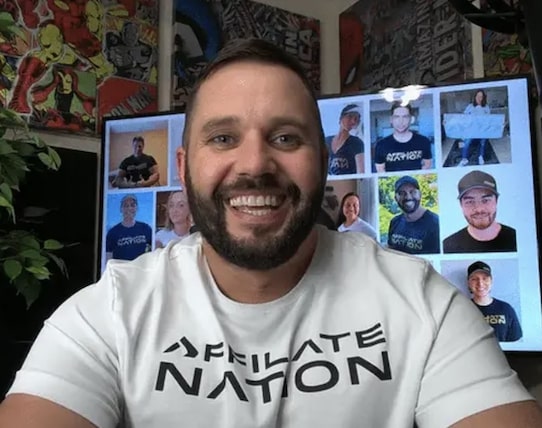 Affiliate Nation wants to help you launch your next business. Not teach you how to sell your own course. Not mentor you and then you have to do it all yourself. Nope, they’ve created a virtual business in a box where ninety-nine percent of the heavy lifting has already been done for you. Why would they do this? Well, they’ve come up with a win-win situation. When you get paid, they get paid. Sounds interesting, right? Scroll down for my Affiliate Nation review.

Affiliate Nation claims they pay the highest commissions in the industry. Here’s how it works. They’ve got a fully automated business that’s ready to go. Good leads, a proper system, a quality product, and stone cold closers. Oh, and get this, when one of your referrals buys, you get paid twenty-five hundred big ones. Even if they put zero down and come in on an itty-bitty pay plan. No wonder complete beginners are winning super fast with this, Dylan says.

So what are you actually selling that’s paying such big commissions? And if they do ninety-nine percent of everything for you, why do they need you? I did some digging. Affiliate Nation was created by a bunch of guys. Along with Dylan, there’s Shane Carling, Jordon Rowse, David Trachsel, Michael Mossino, and Justin Cartwright. They consider themselves a dream team. Each of them has built a six or seven figure business online, and now they’ve joined forces to help the little guy succeed.

Affiliate Nation put together what they call a digital franchise model. They’re hooking you up with a proven, plug-and-play system you can run from anywhere in the world with WiFi. Again, it features in-demand, big ticket offers; prebuilt, high-converting sales funnels; copy and paste ads you can run on social media; and an inside sales team. As long as do your one percent, it’s almost foolproof.

It took a while, but eventually Dylan revealed the product you’d be selling. It’s called Unify Travel Club. He’s in the pitch video for that too. Members get to enjoy the following advantages: save thousands on vacations; get access to private inventory; get the best price guaranteed; get world-class concierge service; access to all Unify Travel Club group retreats; a chance to earn entirely free vacations; the ability to travel ten times more for ten times less.

Again, from the sounds of it, each referred sale would earn you at least twenty-five hundred bucks. One sale a week and you’re on pace to earn six figures a year. All from selling experiences, memories. Pretty cool. Affiliate Nation has quite a few members already. Many have earned their first-ever commission through them. Some are hitting significant income levels in a relatively short amount of time.

From experience, I can tell you big ticket affiliate marketing is one of the only ways to enjoy the laptop lifestyle we all desire. You’re truly free. No emails, texts, calls, private messages, or Facebook group support to answer to. And four figure commissions means, if you do it right, you can earn a lot with only a little bit of traffic. It all comes down to how well their ads and funnels convert. But from the outside looking in, I like what I see with Affiliate Nation.