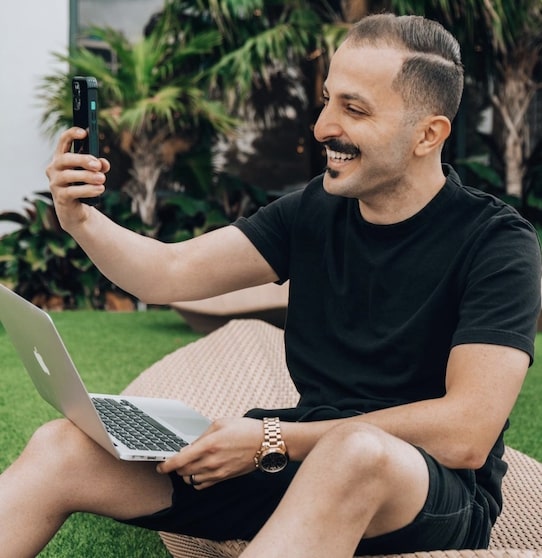 Bashar J Katou can show you how to achieve the equivalent of a bachelor’s degree in Amazon entrepreneurship. Specifically, he’ll teach you how to find profitable products you can sell on Amazon without wasting hours on research and due diligence; how to leapfrog your products to the first page of Amazon search results, which is where ninety-nine-point-nine percent of sales occur; and how to automate the entire business so you never have to touch a single thing. Skeptical? Same. Scroll down for my BJK University review.

Bashar claims he’s a seven figure Amazon FBA seller first, guru second. The reason most people never make money with Amazon FBA, he says, is because they try to figure everything out themselves. They watch some YouTube videos. Think to themselves, “This doesn’t look that hard.” Start looking around their house for ideas on what to sell. But they don’t take into account demand, competition, sourcing, margins, making it to page one in Amazon, etc.

“Only seven figure sellers with a predictable system for locating, sourcing, and launching products can say, ‘When I list a new product for sale on Amazon, I expect to see profits,’” Bashar explains. And that’s exactly what he’s got. A winning formula. And it’s allowed him to walk away from a struggling restaurant business, travel the world with his wife, retire his parents early, even buy his dream car: a beautiful cream colored Bentley.

While some Amazon FBA experts recommend finding one home run product and trying to get rich off that, Bashar prefers going for lots of base hits. He launches as many different products as he can. Better odds, more stability, and more scalable, he says. Why not have three, four, eleven products making you two or three grand a month? And then just keep rinsing and repeating from there? he reasons.

“Think about it,” he adds, “if the average millionaire has seven streams of income, why should your Amazon FBA business only have one? What if something happens to it? What if you get competitors? What if your listing gets shut down? Or whatever happens to it, right? Well, that’s why you want multiple products out there, earning you income day in and day out, that you can fall back on. Make sense?”

With that in mind, key number one, for each product, is nailing the pricing. Knowing how and where to price your product on Amazon. Not only that, but negotiating the cheapest price with your supplier for the least amount of units in order to minimize your risk. Key two is optimizing each listing. Key three is popping it to the top of page one so people can find and purchase. And key four is duplicating the entire process but without your active involvement.

That’s how you build a six or seven figure Amazon FBA business according to Bashar. If you would like his assistance, you can apply for his coaching program, BJK University. Other reviews believe the cost is around five grand. I have no problem with that, but I’d like to see some examples from Bashar himself. As well as a little more information on how he gets his listings to that precious first page of Amazon’s search results. Is he running Amazon PPC ads? Facebook ads? Using some sort of fake review strategy? This matters.