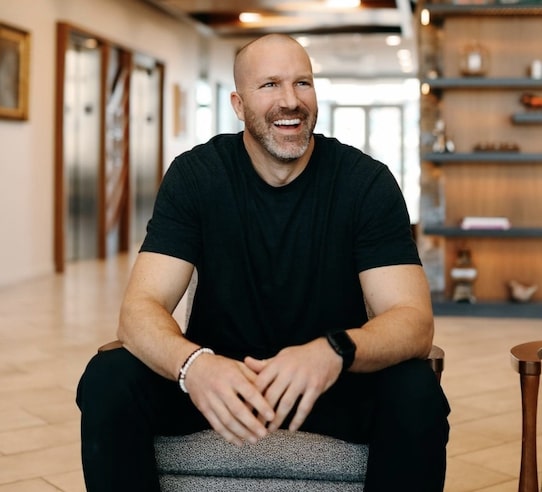 Shawn Moore and his wife Teresa were selling super high-end resort properties back in 2008. They were making big money. Living lavish. About to close on a new mansion in Newport Beach. When, out of nowhere, the owner of the resort they were selling for got indicted on securities charges. Feds came in and shut everything down overnight. Including their paychecks. Shawn was thirty at the time, and he was spending every dollar he made. So when his income dried up, it was devastating.

After a period of denial, Shawn played the blame game. “I wanted everyone to know that I was the victim,” Shawn admitted. “But, over time, fewer and fewer people would listen. Including my own family.” Not only was his sulking annoying to everyone around him, but it wasn’t very productive either. After failing to make a mortgage payment on his Utah home for six straight months, he ended up losing it.

Then they lost their vehicles. Their credit cards were maxed out. Zero money in the bank. Shawn remembers sitting at the kitchen table, head buried in hands, wondering how he was going to climb his way out of this. In that moment he finally realized, “Wake up, dude, nobody’s coming to rescue you. You better figure it out and do something about it.” After seeing an ad for a real estate seminar in a magazine, he and Teresa borrow some money from his mom to attend.

They end up hiring this guy, Craig Proctor, a multi-millionaire real estate agent, as their coach. The timing was awful though. This was like 2009. The real estate market was in shambles. Despite this, they followed Craig’s advice and started getting some closings. Soon they were winning top producer awards. Things were going well. They’re putting some money in the bank. Getting their lives back in order.

After overcoming infertility issues and having twins, Shawn began to think about his legacy. What could he leave behind for his kids? His son, Wyatt, helped him answer that question. See, each year, for their birthday, they decided to celebrate by spending a week in Hawaii. One year, Wyatt, probably four or five by then, goes, “Dad, why don’t you just sell houses here? And then we could swim and be on vacation all the time.”

Hmm. Not a bad idea, Shawn thought. Vacation properties and second homes represented these great experiences, great memories. And he had always wanted to marry the lifestyle part of real estate with the passive income potential that investments could bring. So that’s when he went all in on what he called “lifestyle assets.” Investment properties that you also get some personal enjoyment out of.

Shawn carried out his son’s vision and eventually launched Lifestyle Asset University to teach others what he was doing. He later rebranded it to Vodyssey. It’s a coaching program that helps you build both lifestyle and financial freedom by investing in vacation homes. Shawn has a free webinar where he gives you the mile high overview; after that, you can book a call with his team if you’d like to apply. Vodyssey costs $4,800. I like Shawn. I like the concept. It’s probably a bit too complex for me personally, but I support what he’s doing.