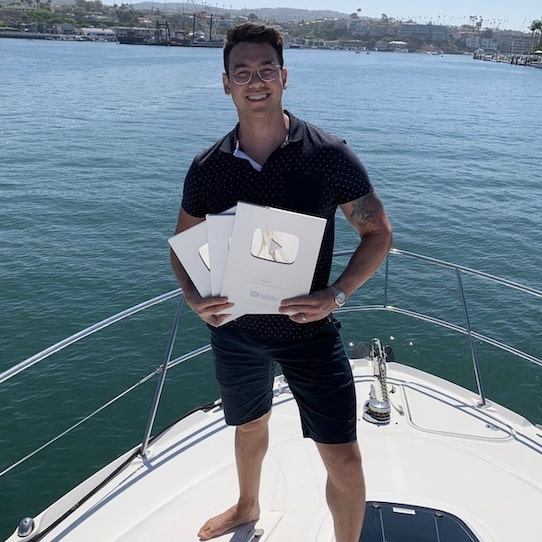 Ryan Hildreth launched a new YouTube channel that now generates about ten grand a month, and the channel’s barely seven months old. He’s got more like it, some of which do even more than ten Gs a month. It’s all possible thanks to YouTube automation. That’s where you start a channel but you don’t film any videos, you don’t edit any videos, and you don’t show your face. Instead, you hire overseas contractors to do it all for you. Keep reading for my Cashflow Channels review.

According to Ryan, all you gotta do is check in once in a while to see how much your channel’s making you. Currently, he’s got seven YouTube automation channels, himself, that brought in a combined three hundred and fifty thousand dollars last year alone. He says his process will work for just about anyone, even you. And that you can make thirty grand a month with it, from home, working less than four hours a week. Sound too good to be true? I agree, but let’s at least listen to his pitch.

If you’ve never heard the name Ryan Hildreth before, he’s a pre-med slash business school dropout. That’s right, before the beautiful blonde wife and burnt orange McClaren, he was just your ordinary twentysomething, working at In-N-Out Burger, driving a beat up Toyota Tacoma truck, looking for ways to make money online. After struggling to build a successful digital marketing agency, he stumbled upon YouTube automation. Finally, something that allows me to be creative and call the shots, as opposed to being a grunt worker, he thought.

So he went full force, perfected his strategy, created standard operating procedures, hired a team, and scaled it up, to the point where he was finally living his dream life. Freedom, travel, getting hitched on a hundred foot yacht, pulling up to the golf course in his latest exotic. You know, things like that. And there’s no better time to learn Ryan’s Cash Flow Channel side hustle than right now, with YouTube bringing in billions in ad revenue every few months, fifty-five percent of which goes straight to the creators.

Now some might think YouTube is beyond competitive at this point (myself included), but Ryan claims it’s still early. Just follow his step-by-step blueprint and you, too, can build hands-free income streams on YouTube. The first thing you gotta do is find a professional actor and video editor. Stay away from text-to-speech software, which YouTube hates. Ryan teaches his Cashflow Channels members how to find top talent, offshore, and hire them for pennies on the dollar. Nailing this step is key if you wanna hit six figures eventually.

Step two is choosing a high CPM (cost per mille) niche. All that is, is how much you’ll make for every one thousand views you get. You want something that’ll pay ten to forty dollars or more, that’s not too cutthroat. Ryan provides a top ten list for everyone who purchases his Cashflow Channels course. The third step is to build a network to go viral and monetize in thirty days or less. YouTube’s rule is, you need a thousand subscribers and four thousand watch hours before you can show ads in your videos and get paid. Ryan knows how to expedite that process.

And that’s basically it. In terms of expenses? Plan on spending anywhere from five hundred to a thousand a month, per channel. Ryan doesn’t say what his Cashflow Channels mentoring program costs; you’ll have to book a call with his team to find out. My one and only concern here is I feel like you’d have to hit the lottery to find some Filipino VA who’s actually gonna make really high quality videos for four bucks an hour. And that part has to happen in order for you to have a shot at this, does it not?