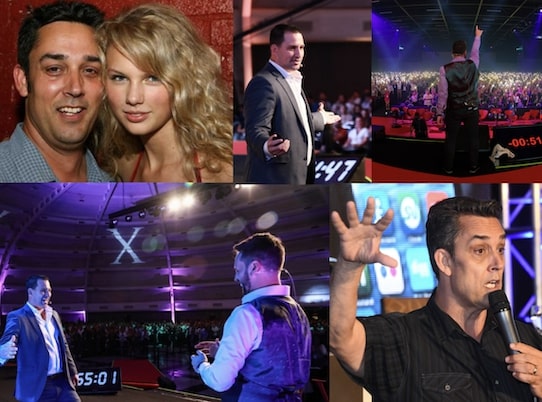 Daniel Den, Pedro Superti, and Rick Barker, the social media marketing genius who launched Taylor Swift’s career, are the co-creators of the Post For Profit Formula. If you’ve ever been frustrated by a lack of clicks, likes, shares, followers, sales, and profit on social media, Daniel says, you may be suffering from Irrelevance Syndrome. It’s when you post and post and post, and nothing happens. Thankfully, Daniel, Pedro, and Rick have come up with a unique methodology to cure you of this awful disease for good.

This works for just about any type of entrepreneur, freelancer, small business owner, or digital marketer. Daniel gives the overview of his Two Comma Social Media Sales Plan with notes scribbled on a napkin. First, sell people what they want. Second, market to the right audience. Third, you need to craft the right message to get these people to pay attention. When all three elements are in place, you can do pretty well, Daniel says.

In fact, that’s all he did to launch his first million dollar marketing campaign. He was an affiliate marketer at that time, promoting a smoking cessation product in exchange for a commission. After teaming up with Rick and Pedro and working with more than twenty thousand students, they’ve fine-tuned that original napkin blueprint even more. In addition to the original three pillars, you need to become the right messenger, engage and grow your audience.

Their Post For Profit Formula helps you implement all of the above starting now. It begins with something called The Offer Matrix, which helps you create an offer that will outsell the competition. Next, there’s a Niche Accelerator Formula Fast Start. This teaches you how to cut through the noise on social media. Also, how to turn two dollars in ad spend into seven dollars in profit. Last, there’s an Ideas That Influence training and a Post This For Profit Ultimate Inspiration Guide.

Everything you’ll receive inside the Post For Profit Formula is valued at three thousand five hundred and eighty-eight dollars. But you won’t pay anywhere near that much. If you beat the countdown timer, you can get it all for just seven bucks. You’re backed by a thirty day hassle-free money-back guarantee. As a bonus, Daniel throws in a secret masterclass: how he went from zero to a quarter million followers in just forty-seven days.

Do you have to run paid ads to make this work? No, but once you see the ROI, you’ll probably want to, Daniel explains. What if your business is a little unorthodox? Will it still work for you? Yes, they’re ninety-nine percent sure that it will. If you implement everything and it doesn’t, they’ll send you double your money back. These three marketing amigos are on a mission to help ten thousand people become experts, authorities, even celebrities in their space.

One of their overriding principles is that the riches are in the niches. Don’t try to be everything to everyone; drill down to where the audience gets smaller, but the message gets clearer. It’ll be easier to convince strangers that your opportunity is right for them. You can charge more money. And therefore profit more from fewer clients. This is exactly how Rick Barker took Taylor Swift from obscurity to worldwide fame and riches. By positioning her as the country musician for teenage girls. Once the T Swift snowball started rolling downhill, it couldn’t be stopped.