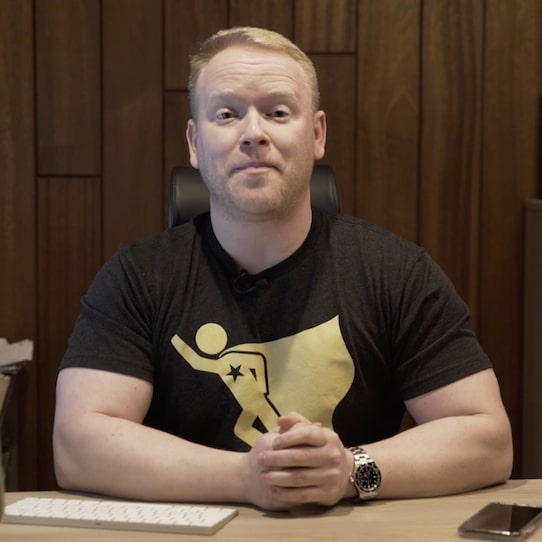 Robby Blanchard went from CrossFit gym owner to affiliate marketer to selling suckers the dream. His Commission Hero course is marketed as a quick and easy way to make $1,000 per day online, or more, even if you’re a total moron. Using Robby’s “simple three step system,” you can make money while standing in line at the grocery store, riding in the back of an Uber, knocking back a few cocktails with your friends at happy hour, oh and don’t forget, while you’re sleeping.

Robby Blanchard makes me physically ill when I watch him on video. He’s everything that gives internet marketers and course sellers a bad name. “The #1 ClickBank Affiliate In The World,” as he likes to remind you every chance he gets, probably hasn’t even done affiliate marketing since he launched his Commission Hero course. Then he uses sales stats from his course to “prove” how awesome he is at affiliate marketing. Um, no. That’s called lying.

Robby Blanchard is condescending. “You can be successful too, guys. The reason why, guys, is because I’ve made everything inside Commission Hero easy to follow and you can go at your own pace. It doesn’t even matter if you can speak English, guys.” I think Robby thinks, guys, you’re all idiots. Guys.

His entire pitch for Commission Hero is one big income claim. Which, oh by the way, you can’t do. I don’t know how many more thousands of aspiring super affiliates he has to sell into this thing before the FTC comes a knocking at his door. But hey, who knows, maybe if he says the word “guys” enough and reminds them that he’s the #1 ClickBank Affiliate In The World, they’ll let him off easy.

Commission Hero has a “grand total value” of $23,670 according to the number Robby pulled out of his butt. However, if you buy now, you won’t pay near that much. That’s right. Today only, Robby assures us, Commission Hero costs just $997. Or, you can do two installments of $597 spaced 30 days apart. I mean, what a steal considering you’re virtually guaranteed to make $1k per day (or more) in no time flat.

Sill on the fence? Don’t worry, you’re protected by Robby’s fake refund policy. Which says: you’ve got 14 days to get your money back, but only if you didn’t access any of the training. Wait, what? Then how could you possibly know if it’s any good? Imagine buying a shirt at the mall, and they’re like, “Yep, you can definitely return it, but only if you never looked at it, touched it, or tried it on.”

Robby Blanchard is making millions of dollars selling Commission Hero to desperate people who know what he’s saying is too good to be true, but his hype just wears them down. They think, “Man, what if he’s right?” and so they decide to gamble, and Robby gets richer and richer. To be clear, though, if he sold this without lying and breaking the law, I would have no problem with it.

Although, I would still have to point out how silly the business model is. Think about it. You’re promoting garbage products on ClickBank using Facebook ads that will definitely get you banned, all the while competing against every other Commission Hero member. Many of which, let’s not forget, will promote, wait for it, Commission Hero. Ugh. It’s so dumb on so many levels, guys.