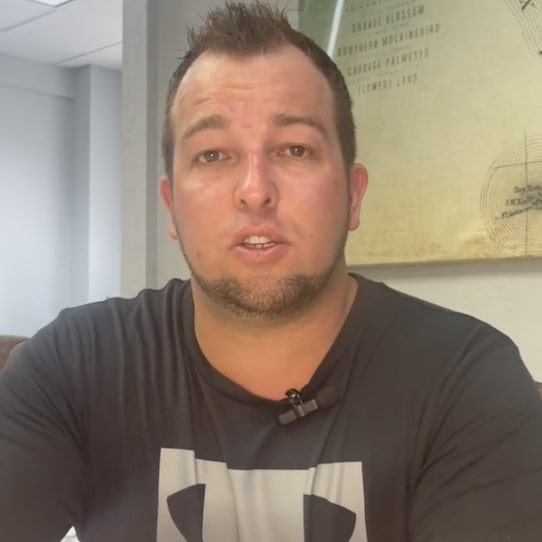 Brandon, from Ecom Proz, does not beat around the bush. “If you’re an entrepreneur with $30k saved up,” he says, “what we wanna do is build you an automated business, done-for-you, in the next 180 days. Guaranteed. Or you don’t pay. Meaning, if you have to do any actual work in the next six months? We are legally obligated to give you a full refund, no strings attached, no questions asked. Now you might be wondering how I can make such a bold guarantee.”

“And it’s really actually simple,” Brandon continues. “On average, we generate our clients at least $20k in revenue in just the first 90 days. For example, one client, Danny, in the first seven months we were able to scale his business to over $80k in revenue using the Automated Revenue Generator. Or Carlie, who hated her job—her 9 to 5 job—we were able to scale her business to $50k in under six months. Or Zay. He was used to his credit cards declining all the time. Now his store does 7-figures in revenue.”

Yeah yeah yeah. Stories can be exaggerated or even made up entirely. Screenshots can be altered. Let’s hear more about this so-called Automated Revenue Generator, B. “It’s actually just what it sounds like,” Brandon explains. “It means we’re gonna build, manage and scale your own Amazon business in the next 180 days or you’re not gonna pay us a cent. [Um, yeah, that didn’t help.] The reason we build your business on Amazon versus Shopify is Amazon has such a large traffic for free.”

“And 70% of the sales that happen on Amazon are from third-party sellers just like yourself,” he adds. “So there’s actually several ways you can sell on the Amazon platform. Such as dropshipping, private label, FBA—each having their own pros and cons. And what we’ve done is developed our own hybrid model that takes the pros of each and eliminates the cons of each to build an Automated Revenue Generator. So you’re never at risk of suspension, you never have to pre-buy inventory.”

“Not to mention, some of these previously mentioned methods actually take six, seven months to even get your first sale. Now you might be asking yourself why we don’t just do this for ourself. And the answer is, we do. But, we are only allowed to create one business on Amazon’s platform using our names. So by partnering with you and splitting the profits, it becomes a win-win scenario. Keep in mind, this is actually a legitimate business that takes capital to start and a lot of fulfillment on our end.”

So if you’re not a perfect fit, basically, Brandon and company don’t want your money. Michael, a real estate investor, bought in a while back—now he’s doing $80k a month in revenue. Kia, a mortgage lender, did over $100k in sales in like 13 months. Then there was Allie, who had already tried another Amazon automation service, who came over to Ecom Proz and now makes more than $30k a month before expenses. Speaking of $30k, if you’ve got at least that much in the bank, book a call to learn more, says Brandon.

Seems like a nice enough guy. But I would have liked to see these success stories of his hop on camera to make it more real. Also, I don’t do well with vague presentations. Makes me skeptical. We do more of the good and less of the bad and use a hybrid model and build you your very own Automated Revenue Generator that works 24/7 so you don’t have to. Like huh? What does that even mean? When I don’t hear details and specifics, it makes me think they’re either hiding something or they don’t really know what they’re talking about. Not saying that’s the case here, just that that’s how it comes off.