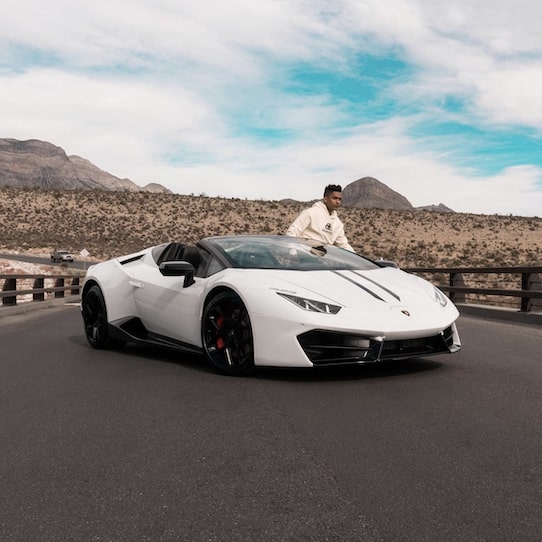 Ethan Duran says, “I’m best known for being broke and in debt at the age of nineteen, to then making two-point-seven million dollars by the age of twenty, by renting out super cars such as Lamborghinis and Ferraris. I used to stress trying to figure out wealth and success. I wanted it so bad but just couldn’t figure it out. While I was broke and jobless I couldn’t let go of my dream of one day owning a Lambo and living like the one percent.”

“The answer was right in front of me all along,” he continues. “I was chasing all the things that in one way or another we all chase after. Then it clicked in my head. How much would the average person pay to drive their dream car for a day? To have that dream life for a day? All I had to do now was figure out how to get my hands on a super car. I had no money and no credit. And unlike everyone else already in the business I didn’t wanna just drive a free car that paid itself off.”

“I wanted to make millions of dollars. I found a way to get access to the cars that I needed and made forty thousand dollars from just one Lamborghini in one month. It was simpler than I thought. I successfully created a new approach; a way to bootstrap this model from scratch without the need for credit or money down. A way to create a business that provides sustainable value not only to myself but also to my customers. It’s how I shocked the entire industry.”

Ethan says his strategies will work for you too. There’s a huge demand for exotic car rentals, and very few people offer it as a service. Why not you? That’s why he put together a comprehensive training that breaks down his entire business model, step-by-step. It’s called Exotic Car Rental Academy, or ECRA for short. Secure your family’s future, take care of your loved ones, and buy whatever you want whenever you want, Ethan says. You could even scale this to seven figures if you really wanted to.

Can you trust Ethan Duran? After all, he’s been featured in Forbes, right? Thing is, articles like that are almost always paid for. So, for me, that carries no weight. I think his Instagram gives him some credibility though. Dude’s definitely around exotics a lot. Still, some proof of income would be nice. And I’d like to hear more about his process for funding these exotics with no cash and poor credit. And where he’s listing ’em to book business. Turo? Or someplace else?

He does have a handful of reviews and testimonials on his pitch page, which helps. A couple of guys bought ECRA and just got their hands on a new 2022 baby blue Corvette they’re stoked to start renting out. Another guy uploaded a short video showing off his new cream-colored C8 with a red racing stripe. He called Ethan’s course “game-changing,” but hadn’t yet made any money. Another guy went from renting out jet skis, which made no money on rainy days, to cars, thanks to Ethan. “Perfect way to get money, rain or shine,” he said.

Then there’s Justin, who said, “I’ve been a part of Ethan’s Exotic Car Rental Academy for a little over a year now. Bought two vehicles: a BMW i8 and a Slingshot. The program really does work, guys. I’m twenty-five years old. These are just two of my vehicles.” So yeah, students seem to be getting cars okay, but most are still very early in the game. No mention of what ECRA costs. You’ll have to submit an application to find out. Cool concept, just need more facts and case studies.