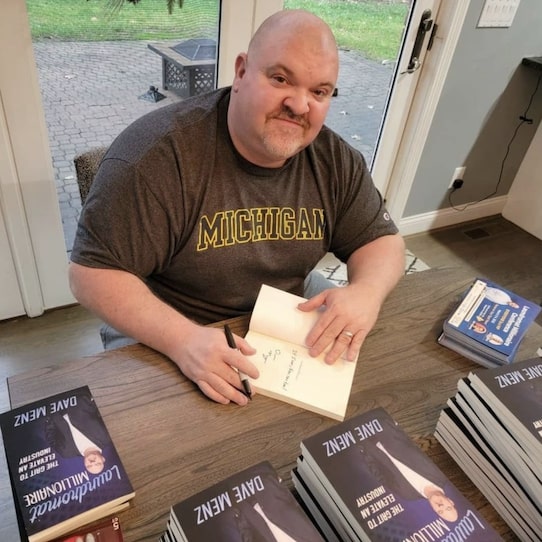 Dave Menz is the Laundromat Millionaire. He believes the laundromat business is the best small biz in America. So should you get into it? Not necessarily. Because maybe it’s not the best for you, specifically. “Let me explain,” Dave says. “I’ve seen a lot of people get into the laundromat business for the wrong reasons, which doesn’t just hurt them but also their community and the industry as a whole.” Read on for my Laundromat Millionaire review.

“And that’s because they’ve been sold this dream,” Dave continues, “that a laundromat is this incredibly passive income powerhouse that’ll immediately make money with almost no work. It’s a complete lie. Yes, once you’ve hired all the staff, set up all the systems, and overhauled your new purchase? It can be relatively passive at times. But if that’s your expectation straight outta the gate? This business is probably not for you. Also, if you’re looking for something prestigious, probably not for you.”

I already like this guy. Finally, some truth in the course selling space. Imagine that, right? Dave admits, while he thinks laundromats are just the bee’s knees, he’s in the minority here. To most, it’s not sexy. You think of a laundromat and you picture a big dirty building and half the dryers aren’t working and there’s a homeless dude outside asking everyone for their quarters (wait, do laundromats still only take quarters?), and yeah, no one really grows up wanting to be the laundromat king or queen, do they now?

But here’s the good news, Dave says: if that doesn’t bother you, then it’s an incredible opportunity with much lower competition than most other businesses. While everyone else wants to be a real estate mogul, riding around in a Rolls, smoking a stogie; or maybe launch their own multimillion dollar supplement line through Amazon FBA; or self-publish ebooks and audiobooks; or whatever other flavor of the week comes across their screen, promising a life of luxury? Well, guess what? Those laundromat profits are sorta there for the taking.

“If you care more about being an entrepreneur than looking like one?” Dave says. “And you also care about helping your community? And doing it in a flexible and hopefully semi-passive way? Then this might just be the business for you. I currently own four successful laundromats with over thirty employees in total. But I first started out with a pretty janky laundromat that I ran myself while working full-time at a different job. I turned it around in six months, bought my second one, and expanded from there.”

“And I believe you can do the same, no matter where you are in life,” he adds. “Because I didn’t really have any advantages when I started out either. My message to you is simple: if I can, then you can too. I grew up in poverty and I remember going to the local laundromat when I was a kid and the owner would look down on me and my family, rather than having empathy for the situation we were in. And that’s why I’m so passionate about this industry to this day. I know the effect [properly run] laundromats can have on the community.”

But most folks who get into this space either don’t get it or just don’t care. Their laundromat turns into a suffocating job or they neglect it and now it’s just another dumpy laundromat that doesn’t make much money. If you wanna launch your own laundromat biz, and do it right, and actually feel good about it, and yes, build some recurring revenue in the process? Check out Dave’s The Laundromat Millionaire Elevate course. Cost is a grand, comes with a thirty day money back guarantee, beautifully (and honestly!) marketed.