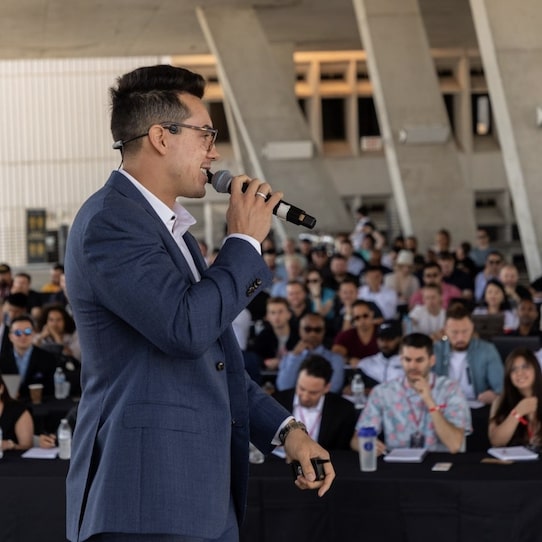 Remote Integrator founder Ravi Abuvala dropped outta law school a few years back, when his dad was diagnosed with stage four lung cancer. Ends up seeing a Tai Lopez ad, buys his SMMA course, wasn’t that great, but it didn’t need to be. It introduced Ravi to a whole new world of online marketing, and the explosive income potential and freedom that came with it. Boom, he was hooked. He kept buying courses, hiring mentors, trying to shorten his learning curve.

Fast forward to today: Ravi’s making multiple seven figures a year, living the exact life Tai showed off in his ad way back when. Lives in a gorgeous high-rise condo in Miami, bought a Porsche and then a plane, flys his woman and friends to Universal Orlando Resort, on a moment’s notice, just ’cause. But I’ve personally been critical of how he’s gotten there. In my opinion, he sells too much stuff for too much money using too much hype. I’d be a lot richer if I was willing to do that, but I’m not.

For example, at the time of writing this, the headline on his Scaling With Systems website reads, “We help entrepreneurs go from zero to one million plus in twelve months or less with fifty percent (or better) profit margins, by leveraging the power of sales funnels, operational talent, and paid ads.” Call me skeptical but there’s no way that’s an average result. You’re gonna take someone who’s never made a dime online and they’ll net at least five hundred grand in the next year? Right.

If that was a typical outcome, everyone in the world would quit what they’re doing immediately and buy every single one of Ravi’s (many many many) courses and coaching programs. When grilled about his bold claims in an interview, Ravi basically shrugged his shoulders and said, “I read a book and it told me that the more saturated the market, the bigger your promise needs to be and the shorter the timeframe it needs to take to deliver on said promise.” Hmm.

So basically, just exaggerate to stand out. And as long as one of your clients gets the result in your headline, you can sleep good at night knowing you’re not a scammer? Even if thousands of other clients, who only bought because of that extreme promise, never even get close? To me, no, that’s not okay. But hey, YouTube’s gonna keep taking Ravi’s ad dollars and other gurus are gonna be just as outrageous and so it’s about par for the course in the make money online industry, right?

And the bar isn’t very high for the quality of content and level of support behind these ten K coaching programs, so as long as Ravi’s a little bit better than the rest (and he probably is), he’ll keep getting away with his aggressive marketing. And the upward spiral will continue. Ravi’ll make more, flash more on his Instagram, appear more credible, sell more, charge more, repeat. It’s honestly fascinating. In this space, we’re all one hype-y campaign away from making as much money as we want.

But we’re also all governed by our own moral compass. Which is why you’ll never see me running an ad like the one I saw Ravi running for his Remote Integrator Masterclass, where he said he and his students work just a few hours a week and yet, they get twenty-two thousand dollars deposited into their bank accounts every single day. I mean, I can’t. It doesn’t even make sense. Why would y’all be making exactly twenty-two Gs a day? And who’s running all these supposed eight million dollar a year businesses if nobody’s hardly working? Filipino VAs? Yep, got it.