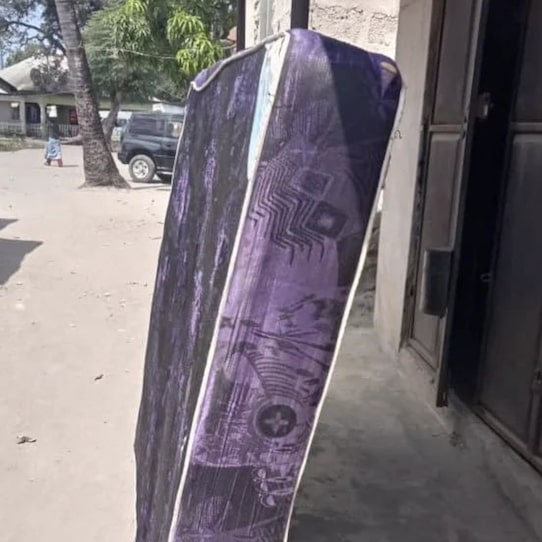 According to Sharetown, a company that handles oversize returns, flipping mattresses is a surprisingly good way to make some extra money on the side. It’s simple. You go pick up people’s like-new mattresses, store ’em in a clean, dry location, and then sell ’em to someone else for a profit. So no, these aren’t mattresses junkies have been shooting up on under some bridge, or mattresses that fat old men have been sweating and disappointing their wives on for the last 30+ years. You can set the blacklight down.

You know how most mattresses these days can be ordered online? And if you don’t like it you can send it back? Yeah well, when they’re delivered, they’re usually like rolled up and vacuum-sealed, right? They’re like a fraction of their normal size. So once they’re opened up, ain’t no way they’re going back in that original packaging. So after Kevin and Darcie try it out for a night or two and decide Nope, too stiff, now you’ve got this big awkward thing somebody’s gotta come get, right?

And for the company who sold ’em the mattress, it’s not even worth it. They’ll just refund Kev’s credit card, eat the loss, and focus on selling the next 100 mattresses, right? But still, Darcie wants the damn thing outta her house, doesn’t she? And so that’s where Sharetown comes in. They’ll do deals with mattress companies and furniture companies and the like, offering to haul off these clunky items customers, for whatever reason, decided not to keep. Still with me? Good.

So how do you fit into this? Well, like every other company that’s kicking butt today, Sharetown wants independent contractors to do the dirty work. No different than Uber or Airbnb, right? So you can sign up to become a Sharetown rep and they’ll basically feed ya these pick up requests in your area. Of course, you could always try to find gently used mattresses on your own to flip, but why would you, when it’s free to become a Sharetown rep, and plus they can send you steady work?

Qualifying is easy. If you’re a U.S. resident with a driver’s license, a truck, a reasonable place to store at least 10 bulk items, a smartphone, the ability to lift at least 50 pounds, and a willingness to list the mattresses online (on someplace like Facebook Marketplace), you’re golden. Now, if the mattress isn’t in a condition to where anyone would want it, you can drop it off to be donated and Sharetown will still pay you. But most times, you’ll be able to flip it—yes, Sharetown then takes a cut—but you can pocket the rest.

How bad is it though, right? Like does Sharetown gouge you so bad that it’s not even worth the effort? Apparently no. Not that it’s a big sample size, but I was reading an interview this one chick did, who claims she’s making anywhere from $3,000 to $4,000 a month doing this (through Sharetown) in the Phoenix market. She estimates her and her hubby spend about 6–10 hours a week on the business. So, worst case scenario, after paying Sharetown, they’re earning like $75 an hour with this side gig.

What could go wrong? For starters, I’m guessing there can only be so many reps in each city, right? Otherwise it’s gonna get saturated real quick. The other risk, I would think, is what if you can’t get a mattress resold? You just spent an entire Saturday morning going and getting this thing, and now it’s sitting in your garage, taking up space, and nobody on Facebook’s interested (or some people are, but they’re all lowballing you). Not the end of the world, but not all that cool, either. I dunno. I’d never do it, but it doesn’t sound half bad for an offline hustle.