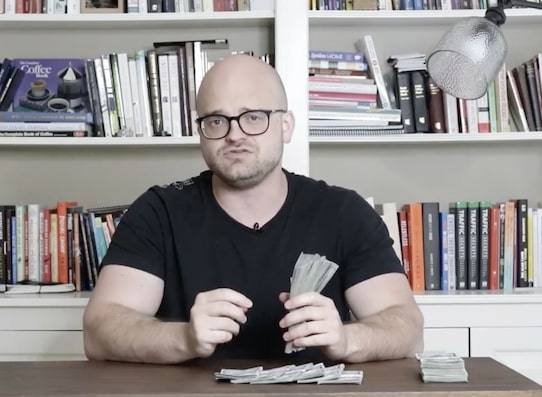 Matt Graham’s Facebook ad says before you start a side hustle like crypto, forex, FBA, drop-shipping, or coaching, check out his ready-to-go done-for-you and done-with-you business projects. He flashes a fat stack of cash to get your attention, then claims he’s generated tens of millions of dollars in online sales. His biggest takeaway is to not try to figure everything out on your own. Team up with someone who’s already successful. Just beware of scams, he warns. Skeptical? same. Read on for my Online Blueprint review.

After taking four minutes to mansplain what done-with-you and done-for-you means, Matt Graham tells you to click the button and sign up to learn more. My inner skeptic is going nuts. Why use the money to bait people in? Isn’t that a little scammy in and of itself? And how do you talk for four minutes and not offer a single detail about your system? I went ahead and opted into his funnel to either confirm or disprove my suspicions.

I’m greeted with a selfie-style video. Matt’s in his car, talking again, but not saying much. “Okay now listen, I’ve been in this space for over a decade. I have spent millions and millions of dollars on advertising, guys, on social media. I could show ya screenshot after screenshot. And of course, if I’ve spent millions of dollars, I must’ve made millions back, right? So, guys, I’m an expert in this space.”

“I started from nothing and I was able to figure [out] my way towards success really by figuring out what not to do. And it took me five years, okay? That’s really not something to brag about. I’m here to tell you it doesn’t have to take that long. I’m not saying you’re gonna be an internet millionaire like myself, but I can definitely help you if you’ve got a burning desire to change your life, immediately.” Go on, I’m listening.

I’m now on my third Matt Graham video, roughly thirty-five minutes of blabbering later, and the man with the beautiful bald head still hasn’t said what he does to make his money. Just that he’s an expert. He’s ran a boatload of ads, gotten a ton of leads, apps, and sales. He’s offering you a win-win. Something to help you make commissions as soon as possible. It’s just frustrating that he’s so vague about everything. I’m a details person. C’mon, Matt.

Eventually he casually mentions you can treat this as a direct sales-style opportunity. And that you can earn overrides on your team’s sales as well. So multilevel marketing? Got it. Makes total sense. I would be careful about how I position that too. If you come right out and ask people to join your downline, they’ll run. So you have to ease into it. I can appreciate that. And look, I can’t stand MLM. But I don’t blame anyone who tries to build their future with it.

Fact of the matter is, business is hard. And tapping into a proven business with marketing and sales assets and mindset training and coaching and support and different ways to make money? Well, it’s appealing to someone who has limited time and skills and startup capital, right? And people do make money with MLM. Heck, the top earners make a killing. It’s just that the outlook is not so great for everyone else. Statistically, the majority make little to nothing. Please understand this going in.