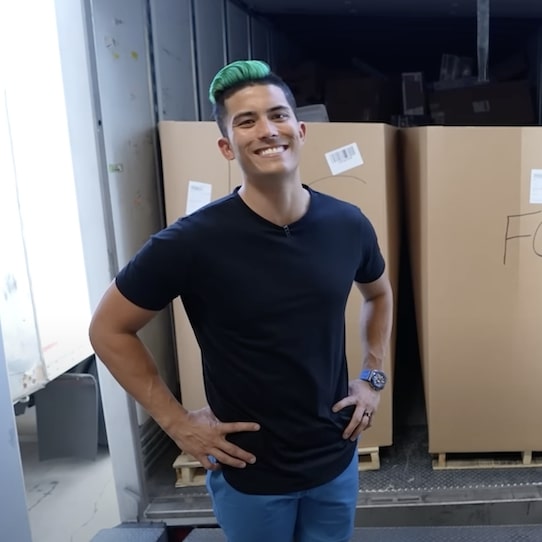 Future Flipper founder Ryan Pineda isn’t afraid to admit when he’s wrong. He used to think automated Amazon and Walmart stores were scams. Today he’s got a Lunar Ecom company that sells just that. Whoops. Talk about backpedaling. But to Ryan’s credit, he owns it. Just like he’s doing here, in his latest YouTube video about pallet flipping. Ya see, previously, he had said nobody should do it, that it’s a complete waste of time. But then he met someone who changed his mind.

“I just met the owner of Nellis Auction,” Ryan says, “and this year alone, they are going to do over $75 million dollars in revenue. Flipping. Pallets. And lucky for us, they’re gonna show us exactly how they do it behind the scenes. So let’s go meet the owner, Spencer.” Turns out, Spencer’s got three warehouses: two in Las Vegas and then the grandaddy, which is over 100,000 square feet, located in Phoenix, Arizona. Company-wide, they’ve got about 350 employees, enough to be open for business seven days a week.

So how did this young-looking dude, Spencer, with a backwards hat, become a freaking pallet flipping mogul? “I started in 2012 in the auction business,” he says, “and our original business was estate liquidations and business liquidations. So we would sell contents of homes and businesses that needed to get rid of things or close down. And then in 2016 I came across a site called Liquidation.com and I bought eight pallets worth of product, made some money on that, and kinda fell in love with it.”

If you’re not following, Spencer’s basically buying bulk wholesale merchandise, which could be like new items that had defects or people’s returns or refurbished goods, right, and then he’s A) reselling those products to make money, and B) flipping the pallets they come on for even more money. But it’s mostly about the former, right? So when Ryan and Spencer talk about pallet flipping, they really mean product flipping and the pallets are just an afterthought. You with me? Cool, let’s keep it moving then.

What’s crazy is, Nellis Auction basically buys anything and everything. They never really know what’s gonna be on those pallets when the truck pulls up and drops off the next load. So they have to unload everything, take it all outta the boxes and packaging, figure out what’s wrong with it (if anything), then list it on their website for sale, along with pictures and a good description and full transparency regarding any damage or defects and whatnot, right? And then their customers can bid on the stuff from there.

As you can imagine, the trick is putting people and systems in place to be able to do all that, at scale, while keeping enough margin to make it worth the effort. If you can do that, as Spencer and his entire team at Nellis Auction has done, you can flip a ton of pallets (of products) for a ton of money. Spencer says all those products you see sitting on the shelves in the background? From toilet paper to bedding to tools to Quest nutrition bars and beyond? Yeah, those’ll all be sold in about the next five days or less. Crazy, huh?

But in terms of numbers, like let’s say we’re looking at a really cool Nerf gun that retails for $29.99. Nellis Auction might get one that’s been opened, tampered with, the box is damaged, so like, Target’s not gonna ship that out to a customer, right? So they sell it (amongst a bunch of other returned goods) to Spencer and company for about $5. And then they list it for auction and it goes for maybe $15. Not a bad flip. Tripled their investment. But now you gotta factor in expenses, and that puts a lot of wannabes not named Nellis Auction outta business. Which has me thinking, maybe Ryan wasn’t wrong (on this one) after all. Way too risky for me.