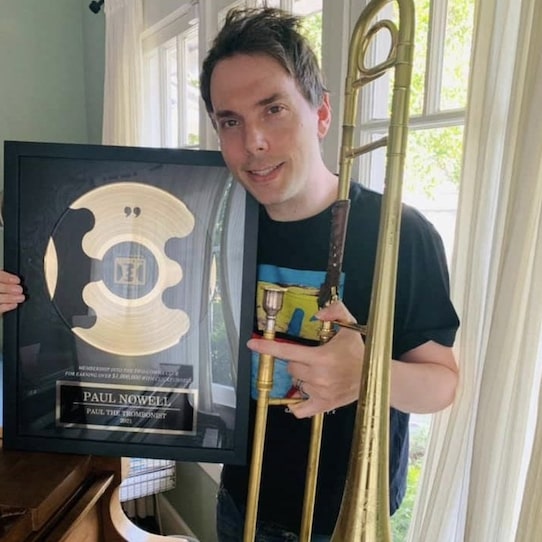 Paul Nowell aka Paul The Trombonist is an entrepreneur from Los Angeles, California. He turned his quirky passion for playing the trombone into a booming online business. Recently, he was awarded a ClickFunnels Two Comma Club award for passing seven figures in sales. Can he help you turn your creative passion into a new digital income stream? He says he can. And that you can trust him because he was (briefly) mentioned in a Forbes article. Okay, let’s hear him out. Scroll down for my Paul The Trombonist review.

Paul used these strategies to pay off a hundred and thirty thousand dollars in student loans in one year. Yes, all from playing the trombone online. You can do it too. It can happen quickly. No prior experience or skills needed. Oh, and this is not a get rich quick scheme, Paul says. It’s for people who have a passion and want an ethical way to turn that passion into money on the internet. You must have a desire to make the world a better place doing what you love.

You don’t need a huge social media following to make money. Paul knows people with very few followers who have become multimillionaires. He also knows people with millions of followers who are poor. His first taste of real money online came from building up his email list and sending them one email to a low ticket product. A few minutes later, he checked his phone. Ding, ding, ding. Notifications came trickling in. He couldn’t believe it. People were buying.

He made over six thousand dollars from that one email. Over time, Paul got better at writing the emails. He learned how to schedule them to be sent out automatically so he could make money while he slept. He discovered you could upload your email list to platforms like Facebook and Google and retarget them with paid ads for pennies on the dollar. The beauty is, even if your ad accounts get shut down you, you still own your list. Those are your leads. Nobody can take them from you.

Question is, how do you build an email list of people who will actually buy from you? The first step, Paul says, is to identify your dream customer. Step two, make a list of their interests. Step three, point them to a cool thing (eBook, video, audio interview, etc.) they would want, but make them opt in to your list to get it. Step four, unlock the cool thing and give it to them. The fifth and final step is to send them follow up emails and retarget them with ads to sell them stuff they would want.

Sound like a lot of work? Well, it is, in the beginning. But it’s worth it. You’re building a machine that will run without you twenty-four-seven-three-sixty-five. You can drive traffic to your funnel for free by creating organic content. Or you can speed things up with paid ads. Or you can do both. Paul will let you clone his proven concepts and pages. You can simply tweak them so they make sense for your niche. You can sell your own products and services and/or do affiliate marketing to monetize your audience.

How big of a list will you need to build to make good money? Paul says you can plan on each subscriber being worth about a dollar a month, on average. So if you want to make an extra five grand a month as a Passion Builder, you would need five thousand people to sign up. Sound doable? Want Paul to personally help you set everything up, get your first few sales, then scale to at least a hundred grand a year? Book a call with his team and see if you’re a good fit. No mention of what the Online Passion Builders program costs.