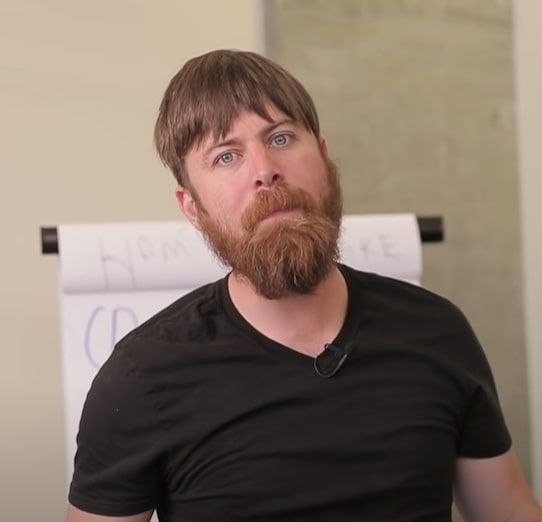 John Crestani is going to show you how to make your first thousand dollars working from home. And he’ll do it in the next two minutes. This, according to his latest YouTube ad. The one that begins with him pointing a money gun at the camera and shooting some hundreds at it. But who the heck is John Crestani and why is he qualified to talk about this stuff? He flashes his ClickBank Platinum award for earning more than a million dollars with them in a year.

The cameraperson zooms in on John’s laptop, which is logged in to his ClickBank account. It shows daily earnings of anywhere between eight and twenty grand. Now it pans back to John who is standing by his white board. “You need to know three things to earn your first one thousand dollar check working from home,” he says. “First, you can’t be doing anything that requires technical skills. I’m assuming here that you don’t know how to program a website.”

“You need to start with a business that is not technical,” he continues, “if you wanna make your first one thousand dollar check. Otherwise you will create obstacles, okay? Number two is you need to do something that doesn’t require a significant investment or a lot of money or any money whatsoever to get started making money because if you are spending money before you are making money, then it’s a much more difficult situation.”

“And the third thing is, you need to do something that doesn’t require a lot of your time. If to earn your money you have to work for every dollar, you are going to be just another glorified slave. That’s what you’re gonna do. If your money is tied to your time, you are a glorified slave. You need a business that’s not tied to time. I love traveling the world, I love experiencing life. Click the link, I’ll show you everything my mentor taught me,” John says.

The story goes, back in the day, John was out in L.A. at some bar. He runs into Kelly Felix, one of the original internet marketing gurus. Kelly had already made his millions at this point. John asks him his secret. Send me an email when you get back to your hotel; I’ll hook you up, Kelly told him. So John did. Kelly replied, told him to get into affiliate marketing. Kelly even suggested some products to promote and gave John some of his own winning ads to model.

Two months later, John had made twenty-five grand. He quit his day job and never looked back. Fast forward to present day. Crestani spends most of his time making entertaining ads like the one above, promoting his Super Affiliate System Pro course. It will teach you everything you need to know to get started with affiliate marketing, make your first commission, and scale up from there. The cost is nine-ninety-seven or three payments of three-ninety-seven.

I love affiliate marketing for all the reasons John covered. It can be done without much tech, it’s bootstrap-friendly, and fairly passive if you do it right. I think John is a world-class marketer and you can probably learn a ton from him. He’s charismatic, never a dull moment with that guy on camera. However, he takes it too far with his marketing. I just don’t think it’s ethical to make it sound so fast and easy to make big money online. I wonder what his refund rate is like.