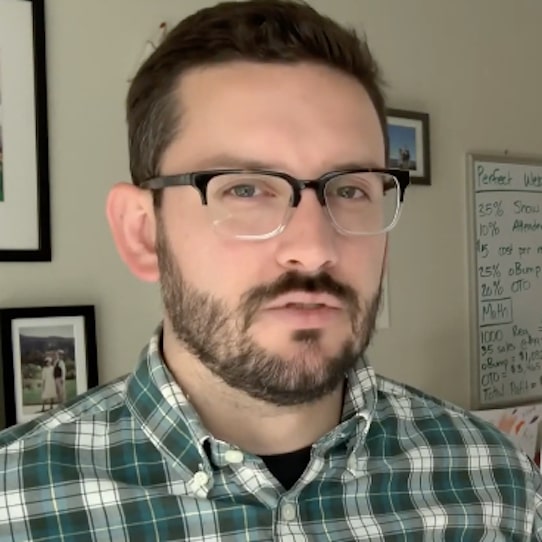 Michael Shreeve Jr. used to run a blog and podcast called The No Pants Project. Today, he seems to be more focused on his Peaceful Profits brand, where he pushes his latest book, The One Book Millions Method, and then tries to upsell you into coaching and consulting services on the back-end. And he suggests you do the same. But can a short book really help you become No. 1 in your niche and scale your business to 7-figures? Read on.

See, when you’re best in class, you can charge more and get away with it. There’s less resistance on sales calls. It’s easier to attract JV partners and affiliates if you wanna go that route. Your audience is more tolerant of you promoting different offers to them. And so on and so forth, right? So it goes without saying, you wanna be at the top of your niche. Well-known, big audience, et cetera. But contrary to what you might think, getting there isn’t about your product or your marketing or even your team.

Take Teslas, for example. They’re notorious for being poorly built. You pick up your new Model X Plaid, you’re all excited, you do a quick walk around, and it’s like, Dude, it’s missing a bolt here, this flap thing’s hanging down behind the front right tire, there’s this little patch by the rear license plate that ain’t even painted, plus some weird, greasy-looking swirl marks on the friggin’ hood. What the hell, Elon?!? And yet, despite this, Tesla’s still got a stranglehold on the electric car market, don’t they?

So if it’s not necessarily just about having the best product, what is it then that allows elite marketers, entrepreneurs and companies to dominate? According to Mike, it comes down to one word: exposure. “Whoever can get the most exposure becomes number one,” he says. “That’s what it comes down to. If you want to be number one, you have to have more exposure than everybody else. And that’s it. It’s that simple. So the question is: What is the best way to get exposure?” Scroll down, keep reading.

There’s a simple answer, Mike explains. If we’re looking for speed and ease, it’s just to go ahead and buy the exposure. Run some paid ads, right? Doesn’t matter the medium. Facebook, YouTube, TikTok, Google—anything. On average, $40 gets you in front of 1,000 people. Spend $500 a day and you’re getting in front of 12,500 potential buyers. That’s a lot, huh? Do that every day for a year and now you’ve reached 4.5 million people. And guess what? Nothing about your biz has to be great if you can get in front of that many people.

“In fact,” Mike says, “there’s a point at which exposure actually corrects a lot of the marketing and sales issues that people have. It’s partially a way to ensure that no mater what marketing, no matter what sales process you use, it’ll still work. Even if your conversion rates are really low, even if you’re very inefficient at how you handle your sales process, the odds are still in your favor. So it’s making the math make it easy for you to be successful. Use the blunt-force tool of exposure so that, even if you don’t hit a home run, it still works.”

Now, in order to pull this whole “just run ads” thing off, the smart thing to do? Is to have those ads pay for themselves. So you need to build an acquisition funnel, as Mike calls it. This could be a low-ticket course, but Mike much prefers a book funnel (like the one he’s running). You put it out into the world, spend a buck, make a buck back, and build a giant list of buyers you can sell pricier programs to, right? And from here on out, it doesn’t matter how good you are. You’ve already won. What can I say, the man’s not wrong.