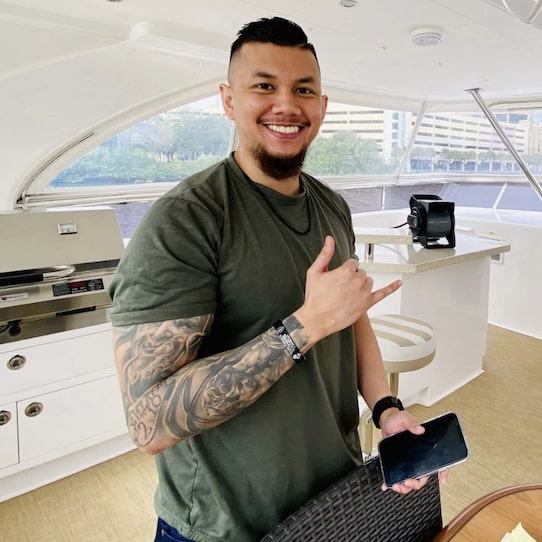 Phil Bohol is the founder of Corps Confidence and cofounder of CloseDeals.com (alongside Dan Henry). The whole Corps thing comes from him being a Marine Corps veteran. He’s married and has an adorable daughter. He’s been featured on CBS, Yahoo Finance, Disrupt magazine, FOX News, and NBC. (I’m guessing most of those were paid for.) And he’s made multiple 6-figures as a remote closer. Not bad for a kid who grew up dirt-poor in The Philippines.

Anyways, when Phil started slaying it as a closer, everyone in this high ticket sales group he was in was all, What’s your secret, bro? But what he noticed was, even after he told ’em his best tips and tactics, it didn’t help. Why? Because they all lacked confidence. Not the case with Phil. Seven years in the Marines will make ya believe in yourself. So how ’bout you? Perhaps it’s time to pop the hood and take a look at the engine (aka your mindset) that’s powering everything you do, right?

“If you wanna close more high ticket sales,” Phil explains in the most monotone voice I’ve heard in a while, “you have to develop unstoppable confidence. People think they can close more deals by getting a new script, learning a new sales technique, reading more sales books, buying another sales course, attending a conference, whatever it might be. While these things can help, they don’t solve the core problem. Which is a lack of confidence. You have to believe you’ll succeed even when others around you are failing.”

This is why Phil was able to make thousands of dollars within months of becoming a closer. It wasn’t the company, the script or the leads; it was him. “You’re not selling the product,” he says, “you’re selling yourself. And in order to effectively sell yourself, you have to have confidence. That’s what I learned in the Marine Corps, and that’s what I took into life, business and sales. Since then I went on to make a high 6-figure income and I started working with other closers to help them make more money and improve their lives.”

But he didn’t stop investing in himself, either. He paid Dan Henry $20,000 to spend a day learning from him on his yacht. I guess that’s one way to show confidence in yourself. But what about the rest of us non-military folk who have the self-esteem of a toilet? Not to worry, Phil says. Anyone can learn it, even you. It just takes the right routine. For Phil, that was: wake up; eat breakfast; get ready; meditate; one hour of responding to emails; study sales; train sales; eat again; hop on calls; review calls; then unplug for family time.

Now Phil goes into his pitch. “If you want to increase your sales rate and make more money, you have three options. Option number one: you can take everything you just learned and go out on your own, without any help, without a mentor, and you can try to do it yourself. I don’t recommend that. It could cost you years of trial and error. I invested $20,000 to learn from Dan Henry, an 8-figure earner. Then I invested $100,000 to attend his business mastermind because I didn’t wanna waste any more time.”

“Option two: you can join the Marine Corps, get your hair shaved off, go through all of that and I’ll see you in a few years. Or option number three: work with somebody who’ll nurture you, develop you, and teach you how to have Corps Confidence so you can close more sales and make more money.” Book a call if you like the sound of option three. I’m not sure how much it costs to work with Phil, but for me it doesn’t matter. I’d rather have my wittle piggies pulverized by Dan’s yacht propeller than be on sales calls all day.