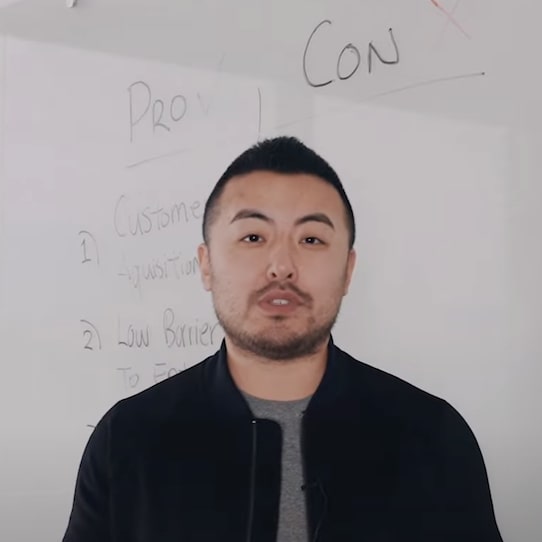 Amazon FBA expert Tom Wang has sold millions of dollars worth of products on Amazon. The thousands of students who’ve taken his Master FBA course have combined to do many times that. Point being, the guy has a ton of insider knowledge when it comes to Amazon FBA. From his unique vantage point, what are the positives of partnering with Amazon? How ’bout the negatives? Is it the right business model for you? Keep reading to find out.

Let’s start with pros. By far the biggest, Tom says, is that you don’t have to worry about finding buyers. There’s already millions of them shopping on Amazon dot com each and every day. They trust Amazon. The majority are Prime members. As long as you show up for the keywords they’re searching for, sales are inevitable. You get to piggyback off of all the momentum they’ve built up over the years. Whereas, if you launched your own ecom website, you might never get enough traffic or have enough trust to see a sale.

The second benefit of doing Amazon FBA is it’s a fairly low barrier to entry. You don’t need hundreds of thousands of dollars to open up a physical retail location. Compared to that or franchises or other offline businesses, it’s pretty affordable and low risk to get started. He’s got a point, but if you compare it strictly to internet businesses, I’d say it’s on the higher side. You’ll still need thousands of dollars to launch, whereas, with blogging or affiliate marketing or local lead gen, you could get in the game for a few hundred bucks.

“The last thing that I love about Amazon is the fact that you can scale this thing to the moon,” Tom says. “If you speak to a lot of business owners, especially in the service-based industry, they will tell you that, ‘Hey, it’s very hard for me to grow my business now because in order to grow I have to hire more people, and if I hire more people it costs more money,’ and this and that. But with Amazon it’s very very easy to scale. You can sell your product to the entire world so it’s really incredible.”

Moving on to the cons. The first is that anyone who buys your product on Amazon isn’t technically your customer. It’s Amazon’s. They own all the data on that person, their contact info, et cetera. “Amazon is very protective of their customer information,” Tom explains. “So for example, if a customer buys your product on Amazon, you don’t get that person’s email. This makes it hard to get that person to come back and buy from you again because, let’s face it, you don’t know who that customer is.”

Another negative is that, because the barrier to entry is so low, it opens up the floodgates to competitors. Anyone can take an Amazon FBA course, learn the basics, max out a credit card or two, and come compete with you. Tom would argue, however, that it’s better than the alternative: at least when something’s cutthroat you know there’s a lot of money to be made. Hmm. I see what he’s saying, but the thing I don’t like about Amazon FBA is that all the gurus literally encourage you to copy what’s working. How’s that sustainable for anyone?

The final con you need to consider is that, despite all the advantages of teaming up with Amazon, the rug could get yanked out from under you at any time, and without warning. Amazon has so much fine print and they’re always making changes to their terms and conditions. It’s easy to overlook something and then, next thing ya know, poof, you’re waking up to a lifetime ban and that six figure income you just spent eighteen months building up? Just went down the drain, didn’t it? Happens more often than ya might think.