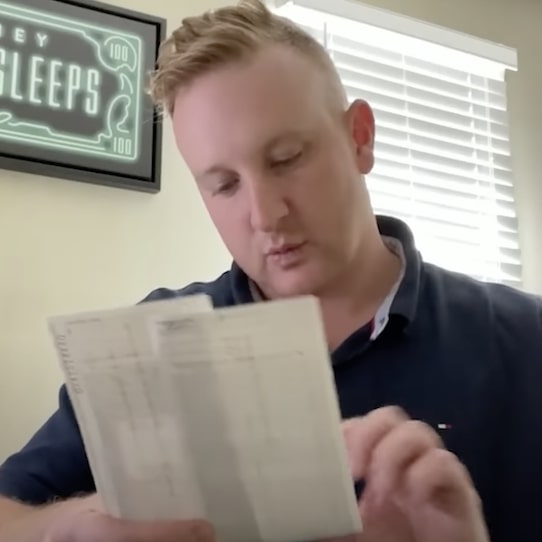 There’s this YouTube ad I keep seeing where this one dude’s showing checks and wires he’s received. If you’ve tried all the things—network marketing, affiliate marketing, Amazon, drop shipping, etc.—and failed, he says, with a framed “Money Never Sleeps” canvas dangling from the wall behind him, then you need to know about this mysterious plug-and-play system he stumbled upon. Sounds believable. I’m whipping out my credit card as we speak. Tell us more, brah.

No tech skills required, he continues. You don’t gotta blog or build websites or cold call anyone either. Nope. He just runs ads on YouTube, drives people to a replicated sales funnel where they watch a webinar and an FAQ video, and then they call the VIP Success Coach hotline (kill me now) where they’ll hopefully sign up so he can make a big fat commission. Brendan, I believe he said his name was, claims he’s been doing this for five plus years now. And he’s still yet to find a better money-making system.

And there’s nothing special about him sans his exceptional taste in decor, so there’s no reason this can’t work for you too. Imagine having $3,000 days, $5,000 days, even $20,000 days—while you’re out enjoying life, not stuck behind some sticky laptop, typing till your fingers bleed. Brendan doesn’t even have to close his own sales; he’s got coaches that do that for him. The brief time he does spend on this business is simply helping new members get started. Just think, that could be you.

And within 48 hours of joining, he says, and then paying for their YouTube traffic co-op thingie, you could be generating your very first leads. And then the following week you could potentially make your first sale. Of what though? Right? Like an endless recruiting scheme… orrrrr? Curious, I clicked through and entered a bogus email to learn more. That took me to a landing page that looks like it was built in the late 90s, with lots of red headlines and more videos of random people getting checks in the mail.

And that’s just a fraction of the people who’re crushing it with this “Automated Cash Flow System,” reads the body copy. So stop trying to learn actual skills and provide real value, dummy. Just plop down on the couch with a can of Pringles and a Diet Coke, turn on Netflix, and enjoy yourself while their team of experts handles everything. The marketing, the tech, on through to the sale. Of which, you’ll make anywhere from $1,500 to $15,750 on! Jeez, at that rate, you’ll be trading in that Ford Focus for a Bugatti in no time.

It’s true, guys. “Coach Brendan” used this same system to go from bankruptcy to balling. From confused and frustrated and hardly making ends meet, to the type of guy who orders an Uber Black SUV just to go a coupla blocks. Like you, when he came across a similar ad all those years ago, he was skeptical as well. But then he thought, What if this was real? And that question kept him up at night. So he kept an open mind, watched all the videos, booked his call, and enrolled. Now he tips 20% for mediocre service.

Be like Brendan. Click the obnoxious red button to “Unlock the Cash Flow Webinar Page,” goes their call to action. At which point, I tap out. I’ve actually seen this offer like 12 times before, with a lead in from different ads and landing pages, which is why I was being so sarcastic from the start. It’s crazy expensive, highly misleading, and there’s almost no mention of the supposed “products” that are being sold. Which, do the math. That could equal trouble for everyone involved. No thankies.