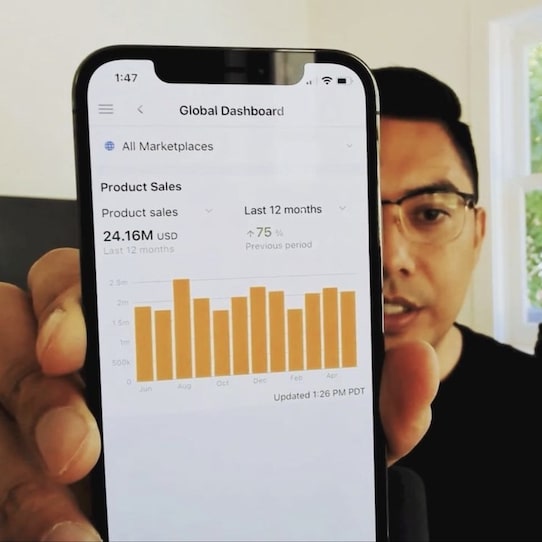 Tim Sanders is the guy behind Private Label Masters, a course that teaches you how to use “compound layering” to start and scale your own successful Amazon business. He’s been doing it himself for about six years now. And as you can see from the picture above, he’s generating tens of millions of dollars a year in sales (not profit). “There were a few turning points in my Amazon journey,” Tim says, “that allowed me to grow my business to where it is today.”

“The first point was just finally putting in that first order,” Tim continues. “Oh man, I can remember, I was scared. I was really scared. I was like, ‘I’m about to wire money to China.’ Okay? Yeah, I’m using this thing called Alibaba Trade Assurance, but I’d never even heard of Alibaba.com before. It just seemed like, man, there’s no return policies for this kind of stuff. When it gets here, what am I gonna do if it doesn’t sell? I had all these worries. I didn’t know the process one hundred percent.”

“What if this comes up, what if that happens? I’ve heard this story, I’ve heard that story, right? And that’s natural. If you’re a new seller, you probably can relate to that. And, if you haven’t started selling, you can certainly relate to that. Well I remember the day I clicked the mouse button when I sent the money and ooh, that was an exhilarating feeling. You can think back to your first order or when you’re gonna do your first order and you will know what I’m talking about.”

“It’s just like, just finally doing it. So that was huge, right? ‘Cause once I got that outta the way? Then it was kinda like being on a treadmill that’s going at a decent clip, and you just gotta keep up, right? ‘It’s in production. Now it’s time to ship, gotta get it shipped. Oh, it just got there; I need pictures.’ Right? You’re just keeping up with the treadmill. And you learn so much through that first product. So that was incredibly influential; I guess you could say pivotal point number one,” Sanders says.

What else? The second thing was when Tim acknowledged, “Okay, I really gotta up my game when it comes to my listing.” The pictures, the copywriting, the bullet points and everything. And just like with anything else, there are levels to this. There’s the slop-it-together-and-just-get-it-live level; there’s the standard okay-this-is-respectable level; and then there’s the savage oh-wow-this-dude-ain’t-playing level. Tim knew he needed to graduate to the latter. Like, “This is my livelihood. I will bleed for this listing.”

And then the third big ah-ha moment was when Tim finally hired out help. Before that, he’d built his store up to where it was doing almost five million in sales a year, with just him and one part-time VA who was doing customer service. And that was it. Once he hired several full-time people, wow, that’s when his life changed. Now he feels unstoppable. Anyways, between his Amazon biz and his Private Label Masters course, Tim’s easily netting a few million a year. Unfortunately, no one really knows his net worth. One website ballparks it at a measly one-point-five million, but I’d guess it’s above ten milli.