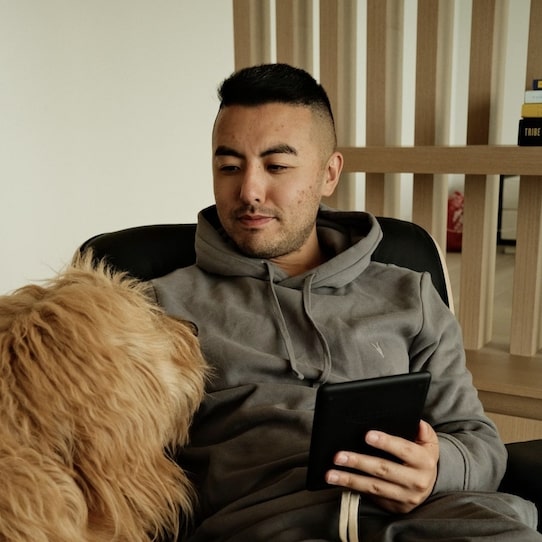 FBA Masterclass creator Tom Wang joined this $50,000 mastermind ran by a guy named Justin Donald. Apparently, dude’s known as The Lifestyle Investor. Anyways, after Tom sold Sdara Skincare for millions, he wanted to learn more about investing, so he read one of Donald’s books and eventually wound up in his mastermind. And, recently, one of the guest speakers in the mastermind was none other than Tai Lopez. And Tom was able to ask Tai two questions.

The first question Tom asked Tai was, after all the books and mentors and crazy life experiences Tai’s now had, what does “the good life” mean to him today? “And he basically said there were four main pillars,” Tom recalled. “He’s got wealth, health, love, and then the last one he’s got is happiness. However, what was really really cool, and this is an ah-ha moment for me, was he then divided up the health pillar into nutrition, mobility, and strength.”

“And then he broke the wealth pillar up into cash flow, liquidity, and net worth,” Tom continued retelling Tai’s answer. “Love, he’s divided into three, which is romance, friends, and family. And then last but not least, happiness. He recommended a book called The Happiness Hypothesis and he recommends a guy named Dr. David Buss. But I love the way that he gave this answer because, for me, I kinda knew like, life’s just not about making money. This just gave me so much more clarity.”

“So that was the first question I asked him. The second question I asked him was how did he balance his life, that good life, with social media. Because social media is an interesting thing. Social media is one of those things that I’m having, to be honest with all of you, a lot of trouble with right now. Okay? Lots of struggle with. Because here’s the thing. I’m kind of like an influencer in the Amazon FBA space. I have a personality, people follow me, they wanna learn from me, this and that, okay?”

“Now, my course, which is FBA Masterclass,” Tom says, “you gotta have kind of a personal brand, right? With courses? Because I am the business. So I feel like I gotta build out my personal brand. But at the same time, I wanna respect my personal privacy as well. I don’t wanna show off everything that I do, right? ‘Oh, check out my house. Check out my new car. Check out my office. Check out this, check out that.’ Like, I wanna live my life. I wanna go out for dinner and not have to worry about posting content.”

Tai’s answer was pretty blunt. To create an effective personal brand on social media, Tai said you do have to be a bit of a narcissist. People love seeing the Lambo, the mansion, right? But at the same time, he could tell Tom was seeking that balance. So he told him, look, Tom, you gotta identify the amount of money you wanna make each month, and then once you hit that number? Just stop posting on social media. Like, you’re good. You don’t need to once your goal is met, right?

But the opposite is true too. If your goal is $100k a month, and you’re only at $50k a month, well, you better get to posting. ‘Cause what better tool do you have at your disposal than Instagram or TikTok or YouTube, right? Makes total sense. But the funniest part, for me, was seeing Tom’s reaction to what I would call common sense. Like he was so giddy about Tai’s answers, but it’s like bro, anybody coulda told ya that. You didn’t have to pay $50k for a mastermind and hear it from Tai for it to hold weight.