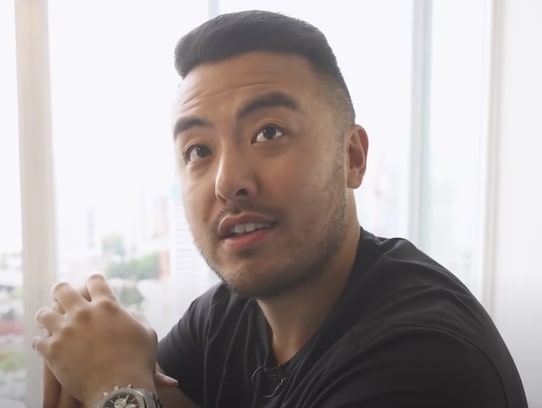 Tom Wang, in his latest YouTube ad, tells his camera guy, Jordan, to come look at his computer screen. “This is frickin’ crazy,” Tom begins, “you see this house right here? Someone is making fifty thousand dollars a month, someone who lives in that house.” Jordan asks how he knows that. Tom explains how he was browsing on Amazon and found this incredible burrito taco blanket. He clicked on the “Sold by” link and looked at the seller’s business address.

Tom typed the address into Google Maps and, lo and behold, it was not some mega company. Just an ordinary home located in Georgina, Ontario, Canada. He reveals the address and shows images of the home, courtesy of Google Maps. A narrow blacktop driveway runs alongside plush green grass and two towering trees, leading up to the single story residence.

“So this is not some big corporation,” Tom continues. “This is probably some kid who lives in his mom’s basement. So if you wanna know how this kid is making over fifty thousand dollars every single month? Well, let me go back to my computer and show you how it’s done.” Now we’re looking at Tom’s screen. He’s on Amazon. He has done a search for the term “burrito blanket.”

The search reveals dozens of Amazon FBA sellers who have burrito blankets listed for sale. It may seem silly. Until you pull up the analytics. On a monthly basis, Tom shows how there’s an average of nearly thirty thousand people who are searching for the term burrito blanket on Amazon. A third party tool lists a monthly revenue of five hundred thirty-four thousand and some change for one particular burrito blanket seller. Another one’s doing a hundred and sixty-five thousand. Another one’s doing thirty-one thousand.

But that’s not even the best part. If you go on Alibaba dot com, which is where most of these guys are sourcing their burrito blankets from, you’ll see that you can order these from China for a little over four bucks apiece. Tom bounces back to the Amazon search results, shows that many of the sellers are charging anywhere between twenty and thirty dollars per blanket. Even after Amazon’s fees, software, tools, marketing expenses, etc., the numbers are encouraging.

Tom says you can do this too. You just need to find your first winning product to sell on Amazon. He’s hoping this ad inspires you to get in on the action. It’s not complicated. If you can buy things on Amazon, you can sell things on Amazon. It’s changed Tom’s life, and it can change yours as well. A picture pops up. Tom is crouched down in front of his new charcoal-colored Audi R8 Spyder. Then another; this time, he’s knee-deep in turquoise water, with tree covered mountains in the background.

Tom links to a short fifteen minute training. It’s free “for the rest of today,” he says, perhaps telling a little white lie. After that, he’ll try to sell you into his FBA Masterclass course. Even though it costs ten grand, I think Tom Wang is one of the most legit people teaching this stuff. I really enjoyed this burrito blanket ad. It made it seem real. Like the average person could actually do this FBA thing. The only part I took issue with is how he outed this poor kid. Think how many extra competitors he’s gonna have now. Or what lunatic might show up at his front door. Yikes. Uncool.