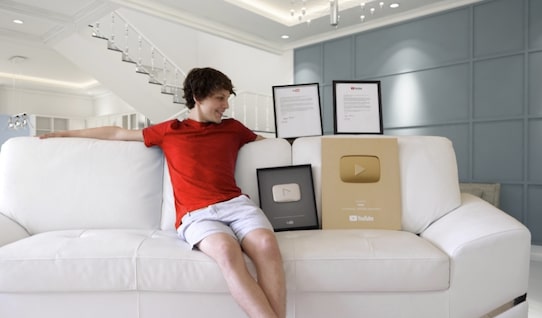 Matt Par, in his latest YouTube ad, asks if you’d like to know how he got over a million subscribers. Without showing his face. And without recording or making any videos. In total, Matt has nine different YouTube channels that make him over six figures a year. He’s hosting a free training that will reveal how to find the best niches; how to generate tons of videos super quickly; and how to go viral and rack up millions of views on your videos.

I attended Matt’s webinar. (Is it just me or does he look like a younger Michael Cera?) Matt wastes the first 10 minutes of the webinar pretending it’s live (it’s not) and giving shoutouts. Then he gets into his story. In 2014, he was a broke, depressed, anti-social high school student. He began making super simple, faceless videos and uploading them to YouTube. Once he turned on ads via the YouTube Partner Program, he jumped to $3k per month. Seeing this success, he went all in.

Soon he was doing $9k per month. But he plateaued. Got burnt out. So he put together a “video creation machine.” Basically, he had other people make the videos. Today, all Matt does is upload and optimize each one. Now he makes more than $30k per month between all of his channels, and only works a few hours a day.

Matt shares three secrets. First, create niche channels, not personality channels. Rather than trying to be the next PewDiePie, where you’re the brand (and therefore, the bottleneck), you could go into the meditation niche, for example, never appear on camera, and outsource the production of each video. Second, he shows you how to get stock images, footage, and royalty-free music; go to Fiverr to get a voiceover done; then have someone piece it all together. Third, get views via “similar metadata.” Meaning, put the right title, description, and tags under each vid.

If you want more specifics plus hand-holding from Matt, he’d like you to buy his course: Tube Mastery and Monetization. Inside, Matt reveals the exact strategies he’s used to start, grow, and monetize one profitable YouTube channel after the next, without being the face of them. The cost is $497. You’ve got 60 days to get a full refund if you’re unhappy.

Minus the whole “this webinar is live” thing, I thought Matt was pretty transparent with what he showed. He definitely does what he teaches, and that’s rare in the course-selling space. Tube Mastery and Monetization looks like a solid program. It’s current. Complete. Seems like Matt put a lot of TLC into it. It’s fairly priced and he’s removed the risk with a money-back guarantee. All good stuff.

The only thing I’m not sold on is this: I don’t think just anyone can throw together some stock photos, footage, and music, hire a voiceover off of Fiverr, upload it to YouTube, spam it with keyword-rich tags, and head to Turks and Caicos while the money rolls in. Because YouTube is so crowded, I think you’d be surprised how good your content will need to be in order to get any traction. I could see a lot of people wasting a lot of time and money, only to have a channel full of shoddy videos and very few views to show for it.