Unlock Your Potential: Why Did Jeff Lerner Write This Book? 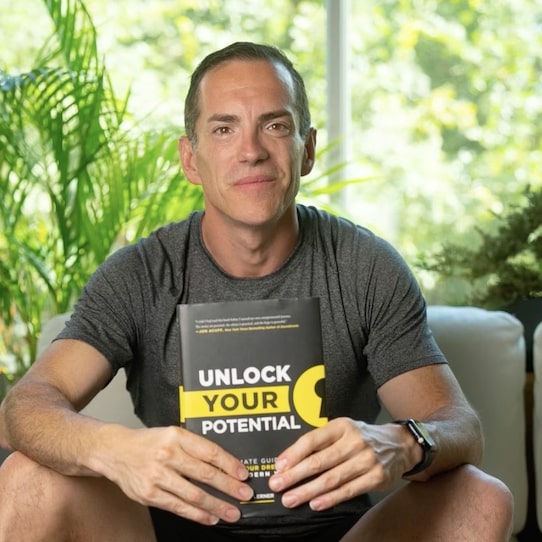 Here’s why. “See, I believe that most people in the world,” Jeff says, holding up a hard copy of Unlock Your Potential, “are stuck inside what I call The Broken System. And it’s this overlap of our educational system, our employment system, and our retirement system. And almost all of us find ourselves somewhere in that system. And from the day we were born, the way we were raised, the way we were taught, we weren’t really told about any alternative.”

“There was no other path for us to go down,” Jeff continues. “And so, at the point you wake up and realize, ‘Wait a minute, this isn’t really playing out the way I was told; I don’t think I’m going to be able to retire; I’m not really getting ahead the way that I thought I was; and I don’t really feel fulfilled day-to-day?’ We don’t know where else to go. But there’s a whole other path. It’s the entrepreneurial path. And it’s locked up inside of each of us. There’s this entrepreneur waiting to be unlocked.”

“This book will teach you how not only to unlock your inner entrepreneur, but to claim that alternative path for your life. When I finished the book and first held it in my hands, I actually cried a little. Fourteen years ago, I was broke, going through a divorce, and my life was crumbling before my eyes. But I dusted myself off, started a new business from the scraps of my previous failures, and put myself back together. Four years ago, I exited my marketing agency and had enough to seriously consider retiring at 39 years old.”

“But a dream came to me. What if I could help people improve their whole lives, not just grow a business? So I started sharing my entrepreneurial beliefs and philosophy online, receiving tons of positive feedback. As a result, the idea of Entre Institute was born. Then I took a credit card with a limit of $20,000 and made a bet. If I could make Entre work with $20k, I’ll continue. If I can’t, I’ll hang out with my family and see what else comes along.”

“Four short years later,” Jeff says, “we became one of the fastest-growing private companies in the world; we were named to the Inc 5000 in our first year of eligibility; and we have enough students to fill our own college, with more success stories than I can count. So when I held the finished book in my hands, all the emotions came at once. But my path isn’t what matters. This book is about helping people make their own paths. You can preorder Unlock Your Potential today.”

Cool story, Jeff, so what can readers expect when they open this bad boy up? It’ll be a documentation of sorts, of all of his mistakes over the years, and what he would’ve done differently if he could go back in time. Not only that, but he’ll take you on a deep dive into the essential principles and philosophies that’ll show you how to think instead of what to think. “In short,” Jeff writes in his Instagram caption, “this is the most important message I can give to the world right now, and I can’t wait for you to read it.”

Hmm. What has two thumbs and won’t be buying this book? Answer: this girl. There’s just something about a smirking grandpa who takes selfies in a Lamborghini Urus that was clearly paid for by selling you the secrets to success that rubs me the wrong way. But hey, maybe I’ve just seen one too many of his YouTube ads promising a Millionaire Shortcut, which leads you to a series of sales pitches for courses and coaching that tops out at something like $30,000. And maybe that’s why I roll my eyes at everything he does.