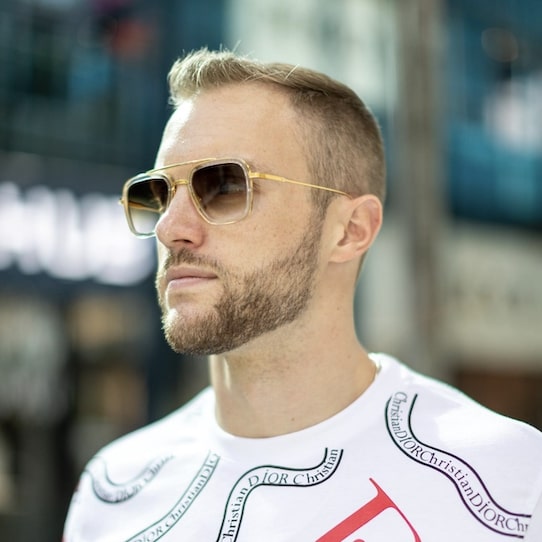 Jeff Sekinger was born in Pittsburgh, Pennsylvania, but his family relocated to Columbus, Ohio, which is where he grew up. Both of his parents were entrepreneurs, and their family was pretty well off until ’08, when the market crashed. They lost most of their wealth, his parents got divorced, so he saw both ends of the spectrum. Life with money was better. After injuring his ribs during a high school football practice, Jeff was prescribed muscle relaxers and Percocet.

That set off a six year battle with addiction. Still, he managed to go to college, get a degree, and land a job with a big bank back in Columbus. But the situation was spiraling. Jeff was racking up debt to pay for the drugs, he’d crashed his car twice, was living in his dad’s basement, forty pounds underweight, everyone knew the deal, couldn’t hide it anymore. Soon he was out of money, out of sick days at work, and had no choice but to go to rehab and face the problem head-on.

A few agonizing months and countless hours of self-development later, he came out the other side with a new lease on life. Quits his bank job, runs up even more credit cards to buy courses and coaching, figures out how to debt hack his way from a 524 credit score to a 793, moves outta his dad’s basement, starts a marketing company, and whaddya know, things are looking up. Excited about his progress, he starts sharing credit tips and tactics on his Instagram, and people dig it.

“But I think that’s the best thing you can do,” Jeff says, “is back yourself into a corner [like quit your job, for example] so you have to produce. And the great thing is, you got nowhere to go but up. And the most valuable thing you can do is change your environment: the people, places, and things around you. Because you got a lot of old emotions and limiting beliefs attached to those things. So that’s the number one thing if you wanna evolve, is to change your environment.”

Anyways, after enough requests from his IG followers, Jeff came out with a course called Credit Secrets, which was mostly about travel hacking. Sold it for ninety-seven bucks. That led to the financial education company 0 Percent and then a cryptocurrency hedge fund called Orca Capital. “I’ve always been so unconventional and pursued things that were different,” Jeff explains. “And crypto was just that. Very unconventional. And still, I didn’t really understand it till 2017. But then I had an epiphany and I knew it was gonna be huge.”

It ended up being almost this accidental flywheel effect, where all of Jeff’s businesses began feeding one another, right? Someone buys a cheap info product to learn how to get interest-free credit to launch their new Shopify drop shipping store with; they like what they see, maybe level up and buy some consulting from him; things are going well, next thing ya know, they’re asking Jeff to reinvest some of their profits into real estate or cryptocurrency or whatever else he’s got going on, ya know?

The big thing was just getting past the analysis paralysis, committing now, figuring the rest out later, Jeff says. Question is: what’s he think about this awful crypto market right now? Well, if you’re worried about it, it’s probably ’cause you got in for the wrong reason. Maybe you saw an Elon Musk tweet, right? But if you invested out of conviction, and you’re not overleveraged, and you have a long-term outlook, you should be excited. Just keep buying, keep holding, watch your net worth snowball.