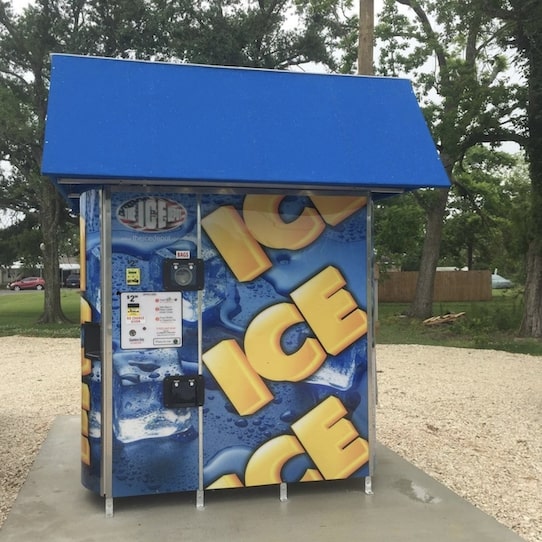 Apparently they are. There’s this one former tradesman who made $71,000, passively, in his ice vending machine business. Who’d a thunk it, right? Here’s his story. So his name’s Brett Gentry and he’s from a little town in Arkansas, where they say things like, “Moe and ’em went fishin’.” Anyways, before starting his G-4 Vending business, he’d worked as a lineman at a utility company for 25 years. Came across ice vending and figured it’d be a good way to retire early.

So, in a town of like 500 people, Brett sets up his first ice vending machine at the state park, which is like 10 miles away from his home. That one vending machine goes on to sell about 900 bags of ice a month, on average. At $1.50 a bag, that brings in about $1,350 a month in revenue. Subtract $250 for expenses, and this good ole boy’s profiting around $1,100 per month from that one ice machine. Since then, he’s rinsed and repeated four times in other locations, meaning he’s likely taking home north of $5k per month.

Codie Sanchez, a YouTuber who covers boring businesses that’ll build your bank account, created a video about Mr. Brett, here, as well. The way she sees it, here’s what you’d have to do to follow in his footsteps. “First, you need a piece of land, or to lease somebody else’s,” she says. “Second, you need at least 10,000 car count aka people driving by. Then you need a water hookup. Electric access. The actual ice vending machine. And then, last but not least, you need cash flow.”

“I’ve been telling you all along, boring businesses pay,” Codie continues. “Show me something more boring that frozen friggin’ water. In fact, when you have this kind of business, you got what I call a high-margin-low-people business. And the average ice machine makes $25k- to $75k a year. As I began looking deeper into the model, I started wondering how much I could make with these and what it would cost me. So, let’s go ahead and break that down first.”

“Compare that to what it’d cost you to get a 20-pound bag of ice delivered to, let’s say, Austin, Texas. Amazon would charge $19.45 for that. Or hell, even Sam’s Club charges $2.28 a bag. So then I thought, ‘Okay, profit looks real, cost of goods is pretty low, I got some margin to work with. Problem is: Do I gotta be a millionaire to afford this machine? This looks pretty serious.’ Well it turns out, they vary. They’re like $20k to $100k. On top of that, you’re gonna have to pay someone to deliver and set up this machine.”

But the cool part, Codie discovered, is you can finance these puppies, right from the vendor, using something called an equipment purchase. Where, you might have payments as low as $300 per month. Even if rent for the “land” was another $300 per month; and say another $100 a month for permits; and another $100 a month for maintenance and repairs; well, your break-even point is about 14 bags of ice being sold per day. Anything beyond that is pure profit. Not bad.