Jeff Lerner Knows All The Things 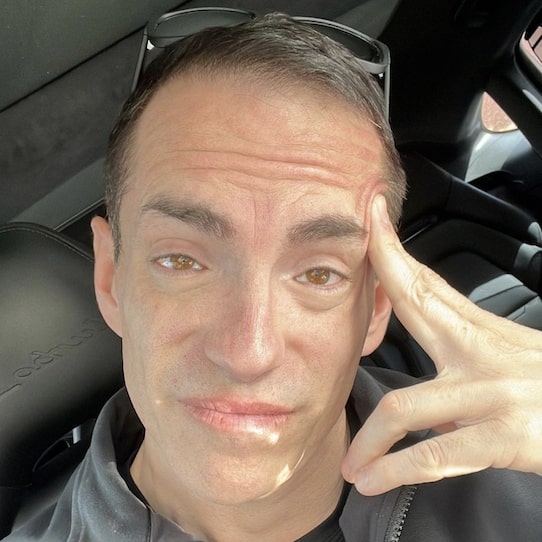 Entre Institute frontman, Jeff Lerner, loves taking selfies and preaching to us mere mortals about unlocking your full potential. Apparently, dude’s got it all figured out. Here are some of his recent rants. “Every human in the world needs personal development,” he says. “Why? Because when we were kids, that’s when we figured out what things meant and what we believed about the world; about our health, relationships, money, and so forth.”

“Then we grew up,” Jeff continues, “and we started to have desires that conflicted with our childhood beliefs. And we have this thing called the ego, which is all about control. So it has to make our environment consistent with our beliefs even if it contradicts what we want now that we’re an adult. And the only way you resolve this is through personal development. It’s how you get the ego out of the way, so instead of protecting beliefs that don’t serve, you go and get what you want.”

So yeah, read books and watch Tony Robbins videos and stuff. What else? Jeff uploaded a YouTube Short about what entrepreneurship means to him, which is downright hilarious given his checkered past. Here’s what he said: “Inside Entre, we define ‘entrepreneur’ as four things. First of all, it’s a purpose-driven person; who lives the Entre way (good daily habits, etc.); and it’s someone who takes ownership of their results in every area of life; and who expects compensation only in exchange for value created.”

Right, got it. So sell people a $37 shortcut to become a millionaire, then upsell them till they’re so deep in debt they’ll never get out. Hashtag value. Oh, and speaking of million dollar ideas, “I get this a lot,” Jeff says. “People are like, ‘Jeff, I have this drive, but I don’t know what to do.’ Listen, we all have tons of ideas, but my mentor taught me ideas die really fast if not acted upon. So, one, let go of caring whether or not your ideas get traction. And, two, start acting on lots and lots of ideas till you find that one right idea at the right time.”

Which brings up another one of my Jeff Lerner pet peeves. The guy constantly contradicts himself. I mean, he literally did an hour-long interview with the author of Essentialism about doing “less but better” and how that’s the key to making progress. But yeah, might as well start an affiliate blog and launch a Shopify dropshipping store and take a remote closer course and sell old comic books on eBay and run Facebook ads for local businesses, and do it all at once, because one of ’em’s bound to take off, right?

What else ya got, Jeffrey? Oh, here’s one. “Money is not wealth,” he just had to clarify while driving in his car. “Wealth is about having assets that create more money. Just having money doesn’t make you wealthy. This is why Robert Kiyosaki says your home’s a liability and not an asset. It doesn’t produce money, it costs money. It’s why Grant Cardone says cash is trash. It deteriorates in value over time. A six year old with a lemonade stand is wealthier than, ya know, an attorney who makes 6-figures a year but has a high-end lifestyle.”

Bro. What? Nobody told Jeff that not all of your thoughts need to go on the internet. Matter fact, Jeff believes the opposite. Just vomit all over Instagram to prove you’re committed, basically. “As someone who’s coached thousands of people starting businesses, the single biggest question you have is whether or not you’re gonna be passionate about this a year from now, three years from now. And with social media, you’ll get clear really fast on whether or not you’re really passionate enough about it to see it all the way through.”