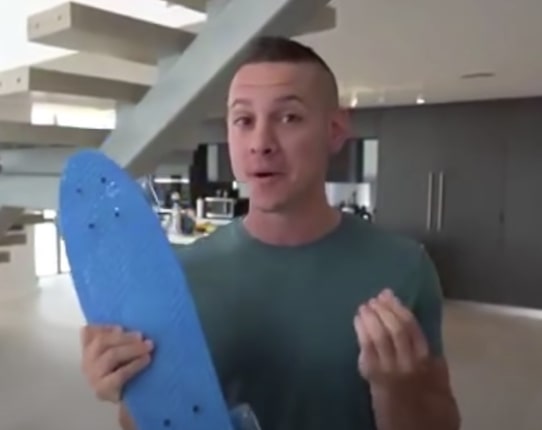 Kevin David has a new YouTube ad promoting his AMZ Autopilot program. He rolls across his living room floor on a blue skateboard, hops off, and starts pitching. He reminds me of a younger, hipper Billy Mays. If you have more than ten grand in the bank, he says, and you don’t know what he’s about to share with you, he guarantees you’re losing a ton of money. He takes a second to knock tried and true investments like real estate and stocks. You’re only earning an average of five- to seven percent with those.

Those are rookie numbers, Matthew McConaughey might say. Investing in the stock market and in real estate is all but dead. The only people still doing it are those that don’t know any better. Gosh. Those billionaires are so clueless, aren’t they? “But there is something so much better,” Kevin says, “and it’s called Amazon Autopilot. Which is a one hundred percent hands-off, done-for-you option where you can sell simple, everyday products just like this skateboard.”

People are buying products like this, in droves, every single day. Hundreds, sometimes thousands of units of these random little products get sold every twenty-four hours. And they sell for more than you could probably imagine. Which is why some of Kevin’s partners and customers are earning as much as ten times more, on Amazon, than they would with traditional investing. Skeptical? Don’t be. Kevin assures us he’s legit.

“My business partner David and myself actually chose to partner with an exclusive set of high net worth individuals who have more than ten K liquid in their bank accounts. We actually create massively successful Amazon businesses with or for them on complete autopilot,” he says. But why not just focus on scaling their own Amazon stores? He gives two reasons. I’m not sure I’m buying either. Scroll down.

The first is that he just loves helping other people succeed. If that were true, why not do this for free? Secondly, he claims Amazon only allows one seller account per person. But I still don’t see how that’s an issue. Unless he’s having problems keeping his lone account in good standing. In which case, wouldn’t you be at the same risk of getting shut down? And why wouldn’t Kevin just have some of his family members open up new accounts and use theirs?

Don’t worry, Kevin says, there’s a reason he’s been featured on Forbes, Entrepreneur, The Wall Street Journal, Business Insider, Future Sharks, and more. Hmm. Is it because you paid a PR company to have those articles written? Asking for a friend. The next little white lie Kevin tells is that they have a very limited number of slots they can fill. This, despite the fact that he’s been running ads for this exact AMZ DFY offer for well over a year now.

Too many half-truths for me. While I don’t think Kevin David is straight up scamming people, I certainly don’t respect or trust him. The mansion he filmed this YouTube ad in was paid for, not by selling blue glow in the dark skateboards via Amazon FBA, but by selling you the dream of a turnkey Amazon business that spits out money while you sleep. A dream you can buy from Kevin David and company for about thirty grand plus a percentage of all future sales, if those sales ever come.