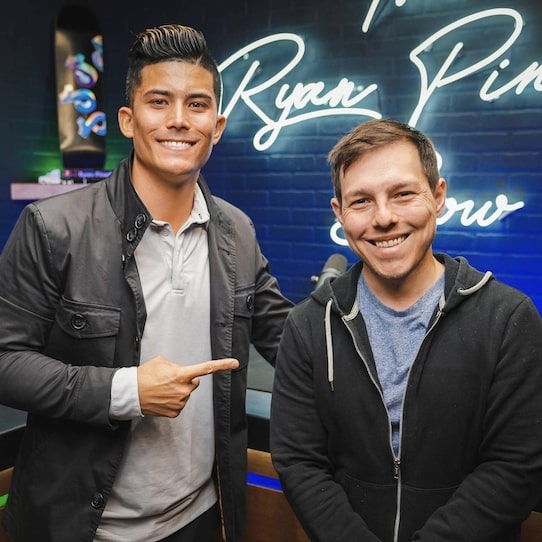 Graham Stephan apparently just hooked up with Ryan Pineda. Well, not like that, weirdo, but they did launch a new business together. “I just started a business with the most famous finance YouTuber ever,” Ryan announced. “None other than Graham Stephan. And recently Graham and I did a podcast together talking about what we plan to do in this business and why we think it’s going to be so big. Him and I have started a real estate fund together called Creator Properties.”

Here’s how it came about. Graham had Alex Hormozi on his podcast. Alex suggested Graham start an investment fund to take his business to the next level. Graham respects Alex, so he was rolling the idea around, even reaching out to some people, seeing if they’d be interested in teaming up. (Graham didn’t wanna do all the legwork to get it set up.) Meanwhile, Ryan’s buddy had watched that episode and told him, “Dude, Alex recommended Graham start his own fund. You should hit him up, talk turkey.”

Ryan, being the opportunist he is, pounced on it, calls Graham up, pitches him, and here we are, right? And yeah, super greedy, but it does make sense. Between Graham and Ryan, they’ve got like forty billion followers. They both come from the real estate world. They’re connected. They know all kinds of deal finders and good operators all over the country. And they pass on so many wholesales and fix-and-flips that might only be singles and doubles, right, and just cherry-pick the home runs and grand slams.

So here’s a way to monetize more of their collective audience, to a larger extent, and profit off of all these real estate deals they’d been passing on. Plus Grant Cardone did it, and he claims he’s worth $1 billion now, so there must be something to it, right? It’s hilarious though, on Graham’s podcast when they were telling the backstory, Graham’s assistant butts in and he’s all, “I gotta be honest, guys, when I first heard the name, Creator Properties, I thought it was kinda gimmicky.” (I agree.)

Not that his assistant could invest anyways. “Ya gotta be an accredited investor,” Ryan explains. “Which means ya gotta have a $1 million net worth or greater. Or, ya gotta have an income of at least $200,000 a year for the last two years. Or if you’re married, I think it’s $300,000 a year, combined, for the last two years. And don’t think you can lie or sneak your way in. ‘Cause when you apply at CreatorProperties.com, we use a third-party accreditation company and they’re gonna be the ones who’ll decide.”

When asked if there’s a minimum dollar amount you can come in with, Ryan said, “Typically, we do about $50k. Ya know, at the end of the day, you don’t wanna have so many investors in one deal. Like it’s just more paperwork. If you’re an accredited investor, you should have more capital anyway. But why invest with us, right? If you go buy a house yourself, you own it 100%. But you’re also the one who has to deal with everything. You gotta find the deal, deal with tenants, maintenance, et cetera, right?”

“But when you invest in something like this, we’re gonna find the deal. You can choose whether or not you wanna invest in it. We’ll manage it, renovate it, stabilize it, all this stuff. And it’s really passive for you. You don’t have to do anything. And so that’s the benefit for most people.” From what I can gather, it’s potentially (if the market cooperates) an okay deal for you, and definitely a great deal for Ryan and Grant, who’ll collect all kinds of fees, get a guaranteed percent of each transaction, plus huge upside down the line if the property appreciates.