Wait, Why Did Tanner Chidester Sell His Lambo? 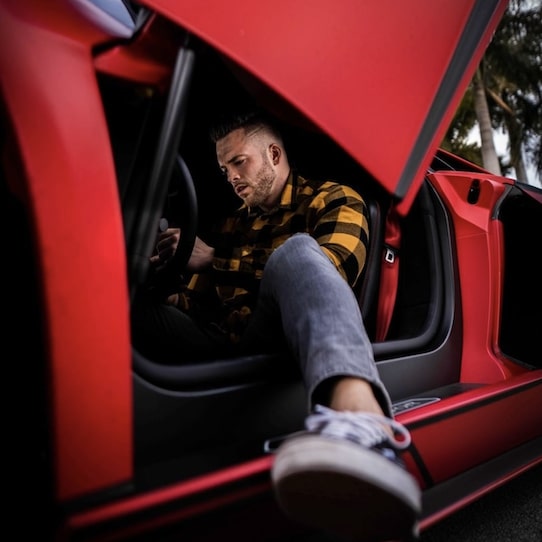 Tanner Chidester had this gorgeous matte red Lamborghini Aventador that he bought, gently used, off a former pro baseball player for about five hundred grand. I’m sure you’ve seen it since the guy used it in his marketing every chance he got. At least he was honest about why he threw down a half a million bucks for it: status. You see, Tanner grew up in a big family. He was one of seven kids. Dad was a teacher, mom stayed at home, money was tight.

“I’d see my parents essentially always budgeting,” Tanner recalls. “Sometimes they’d have fights about it. Nothing crazy but you know, obviously there were arguments and discussions and my mom sometimes would buy stuff that my dad didn’t agree with. And I just remember growing up that I didn’t wanna live that way. I didn’t wanna have money be so tight that I couldn’t buy stuff because I couldn’t afford it. I just wanted it to be [that] I didn’t buy the stuff because I didn’t want it.”

“So originally when I was starting my business, I dropped out of school, I had about a year left of engineering, and I actually moved home to live with my parents. And I remember to this day, I actually printed out a red Lambo Aventador from the internet and I put it right on my wall. And I think the biggest thing that represented to me was wealth, right? Like, the Lamborghini, if I could afford that, that would represent that I quote-unquote had made it. And so I went through, I started making a lot of money, and I finally bought it last year.”

He paid five hundred and fifty thousand, to be exact, for the fiery 2019 supercar. This was in 2020. He only bought it used because they’re in such high demand, it’s nearly impossible to find a new one that’s not already spoken for. Luckily, the one he got only had like two hundred miles on it, so it was basically new. When he finally had it in his possession, it was such a surreal moment because of what it represented. The irony is that that feeling quickly faded. He got used to it, pretty fast.

Still, whenever he took it out, he loved all the eyeballs and attention it drew in. He’d park it and people would swarm him, asking what he does for a living, wondering if they could take a picture by it. Plus, at that time, he was single, so it helped him attract hot girls, which didn’t suck either. Lots of fun, but no lasting happiness by any means. “So I’m doing all that and then this last year, 2021, I moved to Puerto Rico for tax reasons,” he says. “I’m trying to get away from the forty percent tax, I’d rather pay four percent.”

Needless to say, when Tanner touched down in Puerto Rico, his first thought was: having this car here would be so dumb. People are nowhere near as flashy in Puerto Rico as they are in Miami. Hardly anyone drives a nice car there. It’s just not as big of a deal. On top of that, the roads aren’t very nice. Bumpy, narrow, not the kind of streets you wanna rip through in your half a million dollar exotic, right? And then it’s like, are you asking to get robbed, too, by showing everyone there how rich you are?

And then when Tanner got tied down, well, that was the last straw. The Lambo had to go. So he sold it and got a Hyundai Elantra beater, of all things. Quite the change of pace, huh? For now, Tanner’s good with his decision. He’s not saying he’ll never own a Lambo again, but it’s probably not in the cards for the next few years. His biggest takeaway is that anything fun is fleeting. A temporary high that doesn’t last. Focus, instead, on yourself, on strengthening your relationships, on accomplishing hard things.